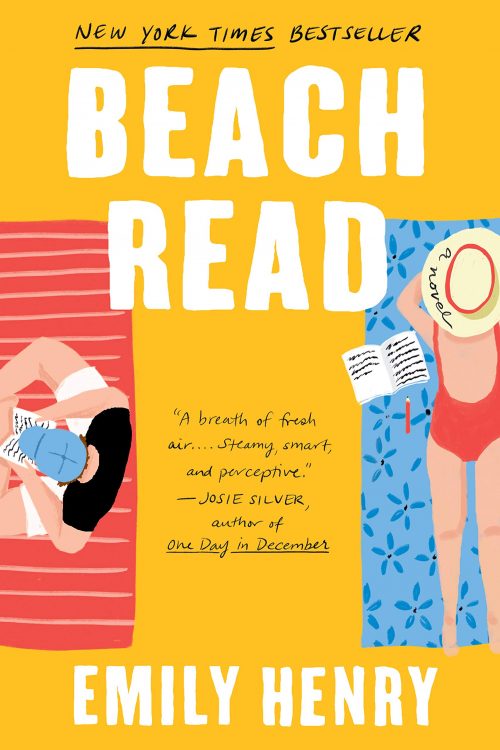 Add to Goodreads
I bought this novel myself, non ad/gifted. There was no obligation to post/give this book a certain rating. I have previously worked with the publisher (not on this book), but this in no way alters my review and I remain impartial.

Published: May 19th 2020 by Berkley
Rating: ★★★★★ (5)
Genre: New Adult/Adult // Romance, Contemporary
Quick Thoughts: A novel so compelling from start to finish, with a romance that feels unflinchingly real.

A romance writer who no longer believes in love and a literary writer stuck in a rut engage in a summer-long challenge that may just upend everything they believe about happily ever afters.

Augustus Everett is an acclaimed author of literary fiction. January Andrews writes bestselling romance. When she pens a happily ever after, he kills off his entire cast.

In fact, the only thing they have in common is that for the next three months, they’re living in neighboring beach houses, broke, and bogged down with writer’s block.

Until, one hazy evening, one thing leads to another and they strike a deal designed to force them out of their creative ruts: Augustus will spend the summer writing something happy, and January will pen the next Great American Novel. She’ll take him on field trips worthy of any rom-com montage, and he’ll take her to interview surviving members of a backwoods death cult (obviously). Everyone will finish a book and no one will fall in love. Really.

It’s no secret that I completely and utterly adored People We Meet On Vacation by Emily Henry last year. It’s (still to this day) one of my favourite reads and sparked my interest in other rom-com’s that aren’t YA. I picked up Beach Read toward the beginning of the year and sadly it kept getting pushed down my TBR stack until I was in a reading funk recently and just knew Emily’s writing would fix it.

January and Gus couldn’t be more different. Despite both being successful authors in their differing genre paths, it’s pretty much their only similarity. They have a somewhat hazy history of knowing each other when they were a little bit younger, and although it’s been ages since they’ve seen each other, it’s clear that they still remember each other when their paths cross again. January is down on her luck, having just lost her father—who had some heavy secrets that weigh heavily on her in his absence—and Gus is going through some baggage, too.

But by chance, at neighbouring beach houses in a small town, they have a chance at re-knowing one another. They quickly make a challenge to one another to get themselves out of their creative—and unbeknown to them, personal—ruts, swapping genres and giving each other miniature lessons in writing something different. But it’s quite clear, through their second-glances, conversations that let the other in on small parts of their lives and accidental close moments, that they realise they’re crossing boundaries. The thing is, January and Gus aren’t exactly opposed to it—they just don’t know how to make themselves happy, or if they will make each other happy, too.

Overall, Beach Read made a very clear impression on me, as seen by the multitude of page-tabs I used for all my favourite parts. It was heart-breaking at times, downright funny, and bursting with firework-worthy moments that made me believe January and Gus were, and always had been, made for one another. I always find it so hard to explain just how much I loved a book when I adored it (I don’t know why) but I guess that just means even more, if I’m speechless. I will be recommending this book forever, a novel so compelling from start to finish, with a romance that feels unflinchingly real, a story raw and messy and oh-so-perfect. Five stars completely.

Emily Henry writes stories about love and family for both teens and adults. She studied creative writing at Hope College and the now-defunct New York Center for Art & Media Studies. Find her on Instagram @EmilyHenryWrites.

Have you read Beach Read?

If you haven’t, don’t forget to add this perfect book to your TBR!