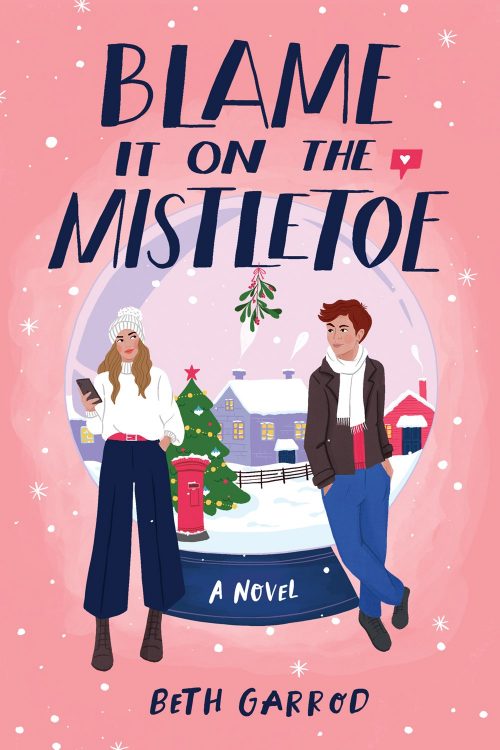 Blame It on the Mistletoe by Beth Garrod

Add to Goodreads
I purchased this book with my own money. There was no obligation to post/give this book a certain rating. This gifting in no way alters my review and I remain impartial.

About The Book:  Tweet Cute meets the movie The Holiday in this funny holiday rom-com where two very different girls swap lives for a Christmas adventure.

Elle is a social medial star with the #DreamLife…or so it seems. Determined to shake up her content and gain new followers, she’s on a mission: can she find a British fan to swap with for Christmas?

Holly loves everything about Christmas. But after a mortifying mistletoe disaster with her ex, her perfect plans unravel like a bad Christmas sweater. Can Holly save the holidays when she switches places with favorite social media influencer?

Elle gets more than she bargained for when she meets the cute boy from across the street. And Holly wasn’t expecting Elle to have a handsome twin brother. This holiday is full of surprises.

I’m a huge fan of Beth’s writing (and I’ve read some of her novels previously) and when I saw Blame It On The Mistletoe (also known here in the UK as All I Want For Christmas, I just happened to purchase the US edition by accident, lol) I knew I had to read it this Christmas!

Whenever a book is pitched as something along the lines of The Holiday, it instantly intrigues me because it’s my favourite Christmas movie! (I adore Nancy Meyer’s films, but that’s a whole other story.) Right away, we’re introduced to our two main characters – Elle, an American social media star with a “perfect life” and Holly, a British Christmas fanatic that happens to be a huge fan of Elle’s. After getting involved in a challenge to spice up her content and get more followers, Elle decides to swap places with a British fan for Christmas. Holly’s going through disaster after disaster with family and exes, so when the chance arises to swap with Elle, she jumps at it.

At first, it seems like it would be plain sailing for Elle and Holly. Elle needs content and what better way than spending it at a place in the UK that has ties to her family and will drum up tons of views? And Holly desperately needs an escape, so spending time with a picture-perfect family across the pond will be the best distraction ever, right? But there wouldn’t be Christmas magic without a little romance, and when Elle meets a cute boy unexpectedly and Holly meets Elle’s cute twin brother, it shapes up to be a Christmas that holds more than either of them ever bargained for.

Overall, Blame It On The Mistletoe was a delightful late December read. I loved the dual POV and getting to know each character in depth. Beth is a great storyteller and I loved that she did an amazing job of showing that life isn’t always as perfect as we can portray to others. I did find Holly a little annoying at the start but by the end I grew to love her and Elle, and of course the romance was the icing on top of the cake. If you’re looking for a sweet American-British Christmas swap with all the descriptive winter feels, this is perfect for you. Four glittering stars!

Hello - I'm Beth, and I write comedy fiction and graphic novels (and bad author profiles). My debut middle-grade book – Sister Switch – came out July 2021, with a follow-up coming 2022. A four book graphic novel series - The Inflatables - is launching summer 2022. Super Awkward was my debut YA book, Truly Madly Awkward was the sequel, and Access All Awkward was the third in the Awkward trilogy. I also have two standalone comedy YA books - Take A Chance On Me, a summer-holiday awkward-fest which was followed by a festive romcom, All I Want for Christmas. All I Want For Christmas came out in the US in 2021 with a brand new title, 'Blame It On The Mistletoe'. My day job is making stuff for TV, radio and online, mainly around social impact themes, and I've worked on everything from Blue Peter to Radio 1 to MTV. Career highlight was probably fishing out Miley Cyrus' used face-wipe from a bin. I currently live in east London, and dream of owning a dog. If you want to get in touch about that - or anything else - head to bethgarrod.com or follow me on Twitter @bethg or on IG @beth__garrod.

Have you read Blame It On The Mistletoe?

If you haven’t, don’t forget to add this gem-of-a-read to your TBR!