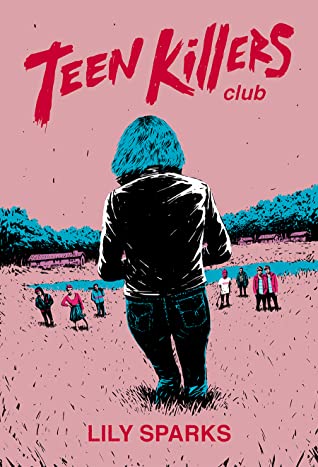 **I was gifted a copy of this book for a fair, impartial review on my blog. This in no way alters my review.**

Framed for the murder of her best friend, a young girl joins a super-secret society of teenage assassins to avoid a lifetime behind bars–and discovers her own true self–in this mesmerizing debut novel.

Seventeen-year-old Signal Deere has raised eyebrows for years as an unhappy Goth misfit from the trailer park. When she’s convicted of her best friend Rose’s brutal murder, she’s designated a Class A–the most dangerous and manipulative criminal profile. To avoid prison, Signal signs on for a secret program for 18-and-under Class As and is whisked off to an abandoned sleep-away camp, where she and seven bunkmates will train as assassins. Yet even in the Teen Killers Club, Signal doesn’t fit in. She’s squeamish around blood. She’s kind and empathetic. And her optimistic attitude is threatening to turn a group of ragtag maniacs into a team of close-knit friends. Maybe that’s because Signal’s not really a killer. She was framed for Rose’s murder and only joined the program to escape, track down Rose’s real killer, and clear her name. But Signal never planned on the sinister technologies that keep the campers confined. She never planned on the mysterious man in the woods determined to pick them off one by one. And she certainly never planned on falling in love. Signal’s strategy is coming apart at the seams as the true killer prepares to strike again in Teen Killers Club.

He catches my expression and recoils, laughing.

“What a face! Signal, you’re awfully squeamish for a girl who supposedly decapitated someone and allegedly dates a burn victim.”

“Yeah, well, I don’t believe you have super psychic powers, so I guess we’re even.”

“That’s what you’ve been telling everyone, right? That you kill people with your mind.”

“Oh, sure, yeah, that.” Erik nods. “That’s not superpowers. That’s just having a knack for psychology.” He turns his full gaze on me, eyes wide and earnest. Coupled with his long, expressive eyebrows and cat’s eye pupil, it’s kind of overwhelming.

“You find a person’s weakness, right? That’s easy, people tell you their weaknesses all the time. Then you get friendly and slowly make them believe that weakness is gone. Once they believe that, boom.” He jabs his thumb in the air. “You break right through it, right into their heads.”

“How specific and rational that sounds.” I roll my eyes, but it doesn’t faze him.

“Eh, it’s hard to describe something so . . . intuitive.” His dimples are back. “What did Michelangelo say about sculpting? That he saw the angel in the marble and carved until he set him free? Not very helpful to every guy with a chisel. But that’s the process.”

“I wish they would. I’m starting to get seriously bored.” Erik bites at his nails. “That’s why I was hoping you’d let me help.”

“Help with what?” I’m already bristling.

“Help figure out who killed your best friend.”

Best friend. No one in the media coverage described Rose as my best friend. Rose herself laughed the title off after middle school. But it’s how I’ve always thought of her, how I’ll always think of her. I stare at the blue plume of smoke rising from the burn barrel and clutch the cold swing chains.

“Your face.” Erik shrugs. “When Dave was reaming you out back  there. You weren’t listening to him. You were thinking of her. My guess is you loved her with all your heart.” He gets up from his swing. “I better put another forearm on the fire.”

He walks away, his swing rocking back and forth, the chains making a high seagull cry overhead, and my vision blurs. Because he’s right.  I loved Rose like a sister. Which is what no one, not her family or her friends or the world, seems to understand.

“Signal?” Erik’s voice makes me drop my hands from my face, but he’s not looking at me. He’s lifted the lid with a stick and is staring into the barrel. “What was your body made out of?”
“Some sort of silicone. Why?”

“Silicone as in silicone bakeware? As in, highly heat and fire resistant?”

I hurry to the edge of burn barrel and peer in. My mannequin’s head smiles up at me. Her glass eyes are blackened by smoke and her hair is gone but otherwise she’s completely intact, and looking more than a  little smug at her own resilience.

“You’ve got to be kidding me!”

I’m dizzy with exhaustion, my “99% Angel” sweatshirt is soaked through with cold mud from the obstacle course, and I’m back at square one. I seriously might collapse. Again.

“We’ll stash her in the burn barrel and hide it in the woods.” Erik’s tone is decisive.

Erik reaches for a large, faded pink plastic bucket at the edge of the sand box. “So we get some cold water from the stream.” “What stream?”

“The one that’s closer than the lake, I’ll show you. We can chat about Rose’s case on the way. Or would you rather give me the bucket and have me get the water for you, Your Highness?”

I grab the bucket before he can make more comments about other people doing my homework.

“There’s nothing to talk about.”

“Really? Because I had a lot of thoughts about that senior she was dating.” Erik walks past me toward the forest, adding: “Especially after his first alibi fell through.”

Erik turns back to me then, eyebrows raised. “You know. How Mike claimed he was at a party when she was killed. But when the police asked around no one had seen him, and then Mike confessed he’d left the party early to go smoke out with a friend.” He watches me for a moment, then his tone softens. “Oh. You didn’t know.”

“That can’t be true.” I clutch the bucket, my fingers going cold, the light-headedness from earlier washing over me. “Mike was a church kid, the pastor’s son. He didn’t even drink.”

“Sounds like there’s something to talk about, then.” Erik shrugs, and disappears through the trees.

I hurry after him into the shadow of the forest, down a winding, narrow trail almost swallowed by banks of fern.

“How did you hear that?”

“It was covered in the news. How did you not? Your lawyer never brought it up?”

“My public defender wanted me to take a plea deal from the start.”  And I’d been so out of it during the trial, heavily sedated or manic with grief.

“So what, you never suspected Rose’s boyfriend?” Erik pushes. “Yes, but not Mike. The other one.”

The air goes sour around us. My stomach fills with an acid tang. I’ve just handed Erik my most damning secret. 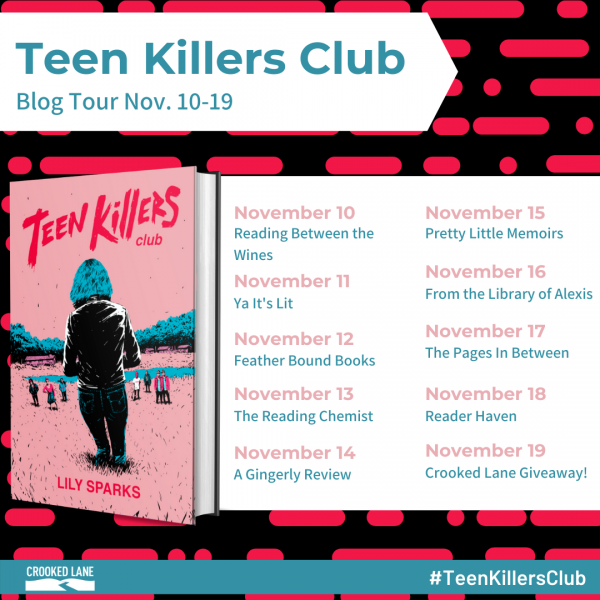 When I was offered the chance to read Teen Killers Club, I was over the moon. Not only does it sound kick-ass, but it just screams everything that I love: killer lead heroine, feisty storyline and a tangled mystery ready to solve.

Signal, the lead character of Teen Killers Club, has been framed for murder. Not only was the supposed murder her best friend, but Signal could never do what they’re saying: she might be a goth misfit from a trailer park, but she has a heart of gold. Not only the obvious, it’s apparent that Signal feels faint at the sight of blood, making killing anyone a rather hard task. So when she dodges prison time for joining an elite group dubbed Class A – some of the most dangerous and criminal under-18’s in a secluded camp, where everyone trains as assassins – it’s not all she expected.

But Signal isn’t going to let the prospect of who she’s surrounded by now put her off the mission at hand: she wants to find out who killed her best friend. After all, it’s the only reason that she chose to be part of the group. She doesn’t belong here, not part of the Teen Killer Club. Nevertheless, as she starts to get to know the new people around her, falling in love and also haunted by a mysterious man in the woods, it proves to be far from the experience that she thought. And finding out at what lengths the campers are confined to, with the real killer on the loose, it’s going to be one hell of a journey.

Overall, I just FELL for this book. From the whip-smart characters, perfect (yet dark) humour and self-discovery undertone, there was nothing to hate about Teen Killers Club. I turned page after page, eager to uncover the mystery with Signal, feeling taken along for the thrill-seeking ride of close-calls, teens with an edge and the lengths someone will go to for closure. This was by far one of my favourite reads of the year and it’s so hard to not give too much away without spoiling, but all I can say, without a doubt, is that Teen Killers Club is a glowing five-star read.

Thank you so much for stopping by today on my tour spot for TEEN KILLERS CLUB! I’m so thrilled to be able to introduce this brilliant book to my blog readers. Make sure you follow @teen_killers_club for all the goodness!

Have you had the chance to read Teen Killers Club?

Let me know what you think in the comments or on Twitter @LittleMemoirs, with the #TeenKillersClub