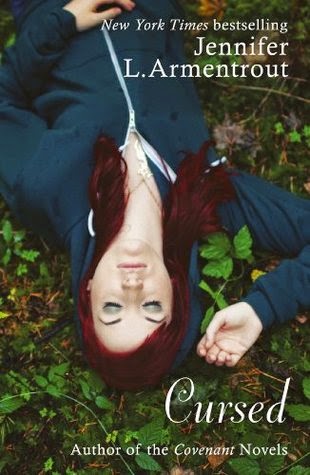 I received this for review from Hodder & Stoughton for review. As always, my reviews are fair and un-bias.

Dying sucks
…and high school senior Ember McWilliams knows firsthand.
After a fatal car accident, her gifted little sister brought her back. Now anything Ember touches dies. And that, well, really blows.
Ember operates on a no-touch policy with all living things–including boys. When Hayden Cromwell shows up, quoting Oscar Wilde and claiming her curse is a gift, she thinks he’s a crazed cutie. But when he tells her he can help control it, she’s more than interested. There’s just one catch: Ember has to trust Hayden’s adopted father, a man she’s sure has sinister reasons for collecting children whose abilities even weird her out. However, she’s willing to do anything to hold her sister’s hand again. And hell, she’d also like to be able to kiss Hayden. Who wouldn’t?
But when Ember learns the accident that turned her into a freak may not’ve been an accident at all, she’s not sure who to trust. Someone wanted her dead, and the closer she gets to the truth, the closer she is to losing not only her heart, but her life.
For real this time.

As a HUGE fan of Jennifer’s other standalone books and series, I was waiting for the moment when Cursed was next in my TBR pile. Mysterious and curiously eerie, Cursed was a different turn from Jennifer’s other novels and toward gifted characters out of the shadow of mythology and something other than what I’m used to with her writing (in a good way). Ember is our heroine in this novel, and after dying in a horrific car accident, is brought back to life by her little sister, who happens to be specially gifted.
But with coming back to life, Ember got some side effects. Anything Ember touches…dies.
Ember feels outcast by her new ability, but tries to control it being the sole guardian for her young sister, and because she’s changed into something different than solely “normal”, she has a no-touch policy for everything in place. Everything feels weird for Ember and she finds herself shunned from everything she used to know.
But then Hayden shows up and changes everything she thought she knew about herself, her gift and her sister’s gift. He tells Ember that he’s been watching her and keeping an eye on her gift, curious and hidden away. Even though Ember thinks he’s a little crazy, she’s more than interested when he says he can help her control her power. Except if she wants that, then she also has to trust his adopted father, who “collects” children like her sister and her. People with gifts far stranger than she could have imagined – although she does find common ground there.
But then there are more unveilings, like her “death” and how it’s far from an accident. Someone wanted her dead – and still does – and there might not be someone she can trust, even though it’s hard to resist Hayden’s claims. And charm.
Heart-stoppingly brilliant, addictive and thrilling, Cursed is a standalone book by one of my favourite authors that I wish was a series so I could read and read MORE about these characters! I was fascinated by how different Ember was from Jennifer’s previous heroines and how Cursed kept my attention throughout. Although it’s not my favourite book from Jennifer, it sure is one of the best.
If you’re a fan of books “out there” with unique and interesting plots that weave between the normal and supernatural, Cursed is definitely the book for you. It was for me.

The Hayden/Ember moments or the ending! This is a spoiler-free review, but believe me, this book is worth reading for the plot and conclusions itself!
What did you think of Cursed?

Did you think it was one of Jennifer’s best novels?