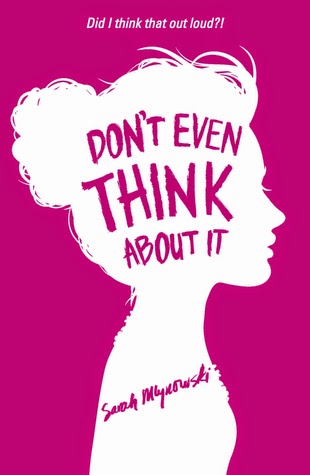 Title: Don’t Even Think About It

Thanks to Hachette for the ARC of this book! As always, my reviews are fair and non-bias.

This is the story of how we became freaks. It’s how a group of I’s became a we.
When Class 10B got their flu shots, they expected some side effects. Maybe a sore arm. Maybe a headache. They definitely didn’t expect to get telepathy. But suddenly they could hear what everyone was thinking.
Their friends. Their teachers. Their parents. Now they all know that Tess has a crush on her best friend, Teddy. That Mackenzie cheated on Cooper. That Nurse Carmichael used to be a stripper.
Some of them will thrive. Some of them will break. None of them will ever be the same.
A smart and funny story about friendship, first love and surviving high school from the bestselling author of Ten Things We Shouldn’t Have Done.

Like I said in my post for what I would do with telepathic powers, I said that I would use them with caution – because once you hear something, you can’t un-hear it. That’s exactly how I was going into DETAI, with the same outlook as: if I was in their shoes…what would I be thinking right now?

Don’t Even Think About It is ultimately a story about how a group of classmates became we instead of I’s after their flu shots gave them a very bizarre and alarming side effect: they could hear each other’s thoughts…and secrets.
It’s a mix of two of my favourite genres; Contemporary and Paranormal, which gives a whole new outlook on how versatile the book is by colliding two genres instead of making it seem like something it wasn’t. The story is written in the fourth person, We, a change for me and I’m sure a lot of people out there would agree that it’s rare that a book is written in a fourth person in YA literature, making it quite unique. There was tons of drama of course, because when has anything that gives you mind thinking abilities ever gone smoothly without a pinch of drama? And that makes a lot of the classmates come head-to-head over thoughts and makes them closer as an additional side effect of the telepathic powers. Although it does change things for the friends within the class now that secrets they didn’t share with each other are out in the open for everyone to hear.
Interesting just doesn’t cut it for Sarah’s latest book. DETAI is in a league of it’s own by far, and even though I did find it a little confusing in places because of the whole fourth person POV, it was just because I’m used to reading in a different way (like third or first POV). And the book needed to be that way for the whole “team effort” in writing their experience with telepathy, anyway. But even if I didn’t get to delve into every mind with the overall POV, by the end of the story, the telepathic aspect let’s us get into each head in some way!
A magnetic, lively and thought-provoking (pun intended) novel from Sarah Mlynowski, and I can’t wait to read more with the second in the series! I was super excited to hear about DETAI getting a sequel.

I have two favourites! When it’s first apparent that they can hear each other’s thoughts and the ending. I won’t give too much away about either moment, but they were both winners for me.

YA Contemporary and Paranormal fans alike, leaning a little into the Contemporary genre more than any other. Adult readers will love Don’t Even Think About It, too. I think it has something that every age group and genre lover will like within the pages. It will also appeal to fans of Sarah’s previous novels, like me! I was a huge fan of 10 Things We Shouldn’t Have Done.

Have you read Don’t Even Think About It?