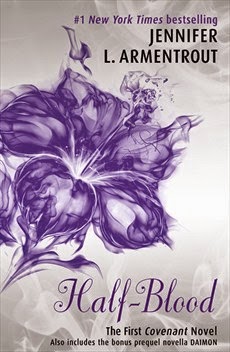 I received this from Hodder in exchange for an honest review. As always, my reviews are fair and non-bias.


The Hematoi descend from the unions of gods and mortals, and the children of two Hematoi – pure-bloods – have godlike powers. Children of Hematoi and mortals – well, not so much. Half-bloods only have two options: become trained Sentinels who hunt and kill daimons or become servants in the homes of the pures.


Seventeen-year-old Alexandria would rather risk her life fighting than waste it scrubbing toilets, but she may end up slumming it anyway. There are several rules that students at the Covenant must follow. Alex has problems with them all, but especially rule #1:


Relationships between pures and halfs are forbidden.


Unfortunately, she’s crushing hard on the totally hot pure-blood Aiden. But falling for Aiden isn’t her biggest problem – staying alive long enough to graduate the Covenant and become a Sentinel is. If she fails in her duty, she faces a future worse than death or slavery: being turned into a daimon, and being hunted by Aiden. And that would kind of suck.

I’m a huge Jennifer L. Armentrout fan (I’m halfway into the Lux series, and adored Don’t Look Back) so Half-Blood couldn’t have arrived at better timing in my mailbox. I was super excited to get into it since I love anything with a plot twisted into Greek Mythology since it never fails to be interesting whatever way the author takes it.

Alexandria (although she asks everyone to call her Alex) has just barely escaped with her life after being on the run from Daimons, not long after her mother was killed by one. So when Aiden, a Sentinel and highly regarded Pure-blood, saves her and takes her back to the Covenant that she left years ago with her mother to live in the normal world, things aren’t the same as when she left. Coming back is hard to adapt to, especially with the new changes like her Uncle being the new dean or the crush-worthy Aiden being her new trainer – it’s either he get her up to Daimon-fighting standard or she’ll end up being a servant for her stepfather – and Alex doesn’t want that.
Like some other readers, in parts it struck a remembrance of the Vampire Academy novels, but I think for me it was just because Alex and Rose are such similar strong female characters – not to mention their similarly sarcastic personalities. For me, that’s where the similarities ended and it really did stand on it’s own for the originality in Greek Mythology and twist on the mythology itself in the modern world.
The more Alex and Aiden spend together in Half-Blood, it’s obvious they have a strong connection but it’s not like that instant-love that readers hate – it’s done without any of the cliches in some YA literature so their relationship was one of my favourites within the book. But Halfs and Pures are highly forbidden, so it’s something that kind of halts their relationship in places, but nevertheless makes for a super-cute pairing within the book. Being a fiery, kick-ass heroine, Alex proves she’d beat anyone to the top spot for best lead character and I thought the way Jennifer wrote her was flawlessly done.
Half-Blood was without a doubt in the top-five books I’ve read this year. Jennifer never fails to write a magnificent, alluring novel with characters I wish were real life people (Alex, Aiden, Caleb, I could go on!). This series has gone straight into my must-read novels and I can’t wait to delve into them all. 5++ STARS.

There are far too many scenes/moments I loved, but one of my favourite (and funniest) quotes from Half-Blood was:

“You better have had a baby, killed someone, or slept with a pure. Those are your three options. Anything less is unsuitable.”

Fans of Fantasy and Mythology books, YA or even Adult fiction fans. If you loved Percy Jackson and Vampire Academy series’, you’ll love the Covenant series.

Have you read Half-Blood?

Tell me in the comments, on twitter or by using the hashtag #HalfBlood