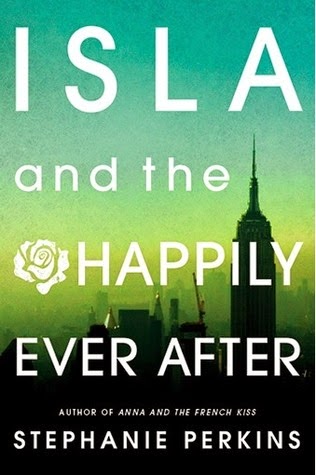 + Plot references, no major spoilers – but be warned that hints are given away. If you haven’t read ISLA yet, be warned that this review will give away references to the previous books: ANNA and LOLA. +

Title: Isla and the Happily Ever After

I bought this book myself! As always, my reviews are fair and non-bias.

The café is boiling. The atmosphere is clouded with bittersweet coffee.
Three years of desire rip through my body and burst from my lips: “Josh!”
His head jolts up. For a long time, a very long time, he just stares at me.
And then…he blinks. “Isla?”

Hopeless romantic Isla has had a crush on brooding artist Josh since their first year at the School of America in Paris. And, after a chance encounter in Manhattan over the summer break, romance might be closer than Isla imagined. But as they begin their senior year back in France, Isla and Josh are forced to face uncertainty about their futures, and the very real possibility of being apart.

Set against the stunning backdrops of New York, Paris and Barcelona, this is a gorgeous, heart-wrenching and irresistible story of true love, and the perfect conclusion to Stephanie Perkins’s beloved series.

I am going to say it now: THIS SERIES IS THE BEST EVER. I didn’t even have to read Isla to know that, because it’s pretty known in the YA literature genre that Stephanie is one of the most amazing authors out there. Isla was very highly anticipated for me (and about a million others!) so when it was next in my TBR pile I tore it open and read it in a very short amount of time.

Isla is a hopeless romantic stuck in a very realistic world that seems to shut down her feelings for Josh (from Anna and the French Kiss, remember?!) and she feels like every time she ran into him last year, she made a huge fool of herself and that he probably thinks she’s insane. So when she spots him back in Manhattan over the summer, she’s not quite over some side-effects of a dental appointment and fears she’s made things even worse.
But little does she know, things are actually about to fall right into place.
When they meet again, Josh and Isla are thrown into a roller-coaster of missed opportunities that both of them were too blind to see before. Josh thought Isla was taken and Isla thought Josh didn’t have a clue she didn’t exist. But now things are out in the open, it gives them a future neither of them imagined could exist. One that is maybe, just the beginning of everything.
In Anna, we went to Paris, then in Lola, we went to San Francisco – now, in Isla, we’re in three of the most beautiful places on earth. Paris, Barcelona and New York. Those cities were the pages of Isla and Josh’s love story, while they were writing it together. Stephanie Perkins shows us yet again how to give us a realistic, heart-breaking, joyful and enchanting story that I’ll remember forever. I was ecstatic to see my favourite characters return from the previous books for the most amazing twist in the story I hadn’t even imagined in my book-loving dreams.
Overall, anyone who doesn’t own this series is missing out on something absolutely mesmerizing and awe-worthy. I couldn’t put it down, and even if I had to, the story never stopped in my head. Isla’s story is now my newfound favourite novel of this series, but also, maybe of all time in Contemporary YA lit. It blows the competition out of the water with the charismatic, real characters and plots to make your heart race. Anything less than 5 stars wouldn’t be acceptable – this is THE book of the year!
Totally worth waiting for.

I’m torn between the very last line of the series and a part that I was not expecting at all with some surprise characters. If you’ve read Isla, you could probably figure this out!

Have you read Isla and The Happily Ever After?

Tell me in the comments, on twitter or by using the hashtag #IslaAndJosh