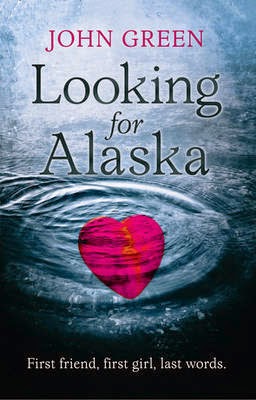 Before.
Miles “Pudge” Halter’s whole existence has been one big nonevent, and his obsession with famous last words has only made him crave the “Great Perhaps” (François Rabelais, poet) even more.
He heads off to the sometimes crazy, possibly unstable, and anything-but-boring world of Culver Creek Boarding School, and his life becomes the opposite of safe.
Because down the hall is Alaska Young. The gorgeous, clever, funny, sexy, self-destructive, screwed-up, and utterly fascinating Alaska Young, who is an event unto herself.
She pulls Pudge into her world, launches him into the Great Perhaps, and steals his heart.
After.
Nothing is ever the same.

I knew as soon as I could fit another one of John Green’s books into my TBR list, I’d thank myself later, because they always end up being HUGE favourites of mine, like The Fault In Our Stars and An Abundance of Katherines. From what I had heard previously about the book, it was a clear five-star read so I definitely went in with high hopes. But gladly, I didn’t know any spoiler-ish details, because I hate missing out on the little unveilings.

Miles “Pudge” was a very unique kind of character and extremely relateable like every lead John Green creates. He had very little friends at home and was stuck in this vicious circle of not stepping out of his comfort zone and doing something amazing, which kind of inspires the adventurer in him, seeking his own Great Perhaps like he had read about from a poet called François Rabelais. Miles loves learning people’s last words, and so that was a highlight throughout the novel that popped up every now and again and I thought it was such an interesting and unique thing to add into the storyline. It gave a mature edge to Miles that some of the other characters when he went to Culver Creek didn’t have, well, until he met Alaska.
She was different, and such a compelling character in the least. I thought her character development was perfect and I didn’t feel like there were any flaws in her character. Although, Miles’s first friend was The Colonel, who’s kind of the first person who nicknames him Pudge and gives him this whole new side to him that the old Miles wouldn’t quite recognise, although it wasn’t a huge rebellious thing, it was just a little growing up mixed with the influence of the new crowd he was hanging out with.
Miles was enchanted by Alaska all the time in her charm and wisdom, despite being up-and-down in her behaviour, and aside from him having another love interest, she was always on his mind and he cared for her a great deal. But she had a boyfriend, and so they were both pulled in different directions a little. Still, in reading a John Green book’s final conclusion, the “after” part (there are parts to the novel like 100 days before and then after) was when I was teary-eyed (code for crying like a baby) and enveloped more if that was possible.
Filled with happiness, then sudden anguish, Looking For Alaska was about everything that happens when we grow up; regret, newfound ways, guilt and friendship, even if not all the answers we desire are given to us. I was taken on the journey with them the whole way and it was a twisted, enthralling and sorrowful one. This book is truly one of the greatest treasures of YA Fiction and if you haven’t read it, you’re surely missing out. A clear five-star read.
Waiting for the Looking For Alaska movie to be made! Would love to see it made into one, because we all know John Green movies are THE best.

“Sometimes I don’t get you,’ I said.
She didn’t even glance at me. She just smiled toward the television and said, ‘You never get me. That’s the whole point.”
– Miles (Pudge) and Alaska
Everything is better said with a quote, clearly.

I’m going to keep it simple. This book is perfect for: EVERYONE. (Really.)

Have you read Looking For Alaska?