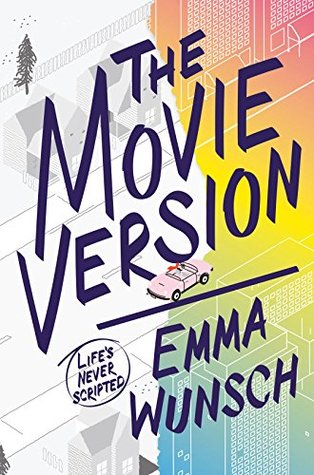 A whip-smart, heart-wrenching debut YA novel about first love, first loss, and filmmaking that will delight fans of Jandy Nelson and Jennifer Niven

In the movie version of Amelia’s life, the roles have always been clear. Her older brother, Toby: definitely the Star. As popular with the stoners as he is with the cheerleaders, Toby is someone you’d pay ten bucks to watch sweep Battle of the Bands and build a “beach party” in the bathroom. As for Amelia? She’s Toby Anderson’s Younger Sister. She’s perfectly happy to watch Toby’s hijinks from the sidelines, when she’s not engrossed in one of her elaborately themed Netflix movie marathons.

But recently Toby’s been acting in a very non-movie-version way. He’s stopped hanging out with his horde of friends and started obsessively journaling and disappearing for days at a time. Amelia doesn’t know what’s happened to her awesome older brother, or who this strange actor is that’s taken his place. And there’s someone else pulling at her attention: a smart, cute new boyfriend who wants to know the real Amelia—not Toby’s Sidekick. Amelia feels adrift without her star, but to best help Toby—and herself—it might be time to cast a new role: Amelia Anderson, leading lady.

This has been on my shelf for so long and I’m not sure why I haven’t read it yet. Maybe because of the huge stack of ARC’s that I’m slowly, but surely getting through, but either way this book just spoke to me. So I decided to dig in and see what it’s all about!

I’m always for a YA Book in the Springtime (and almost Summer!) so The Movie Version sounded like a breath of fresh air. The book starts with Amelia, our heroine, coming home from a while away over the Summer. It’s more than obvious that Amelia is a strikingly honest character from the get-go. She knows in the Movie Version of her life, her brother Toby is the shining star. He’s everything that she’s not; popular and ever-so-charming. He’s not obnoxious, either, because of his popularity with everyone – he’s a genuinely nice guy and Amelia can’t help but feel shifted from the spotlight.

But suddenly, her bubbly brother turns into a shell of himself, changing into someone she no longer recognises as the Movie Version Toby. He’s not hanging out with the same people or acting the same way, and Amelia can’t help but try to uncover the reasons why he’s not himself, leading her to the chilling conclusion of Toby’s real feelings going on inside his mind.

Honestly? This book just blew my expectations out of the water with the raw honesty of the mental illness topics that it covered in a very educated manner. Amelia treads carefully, knowing not much about mental illnesses, so at first she’s very confused by it, not knowing the correct way to talk or let alone deal with it. But the more that she listens to Toby, she turns a leaf, learning and understanding what it truly means to suffer from a mental illness. Despite some of the topics surrounding Amelia not knowing what to say and in parts, maybe coming across a little naive to the situation, I think Emma Wunsch is definitely an Author to watch.

Overall, The Movie Version was a hopeful, emotional and downright honest YA book that deals with subjects that so many people are afraid to speak up about. No one should ever be ashamed of Mental Illness, whether it’s anxiety, OCD, depression or anything. As someone who has dealt with these topics personally, I think Emma has completely handled them with delicate and beautiful outcomes. The Movie Version is a four-star read – and a must read.

Have you read The Movie Version?