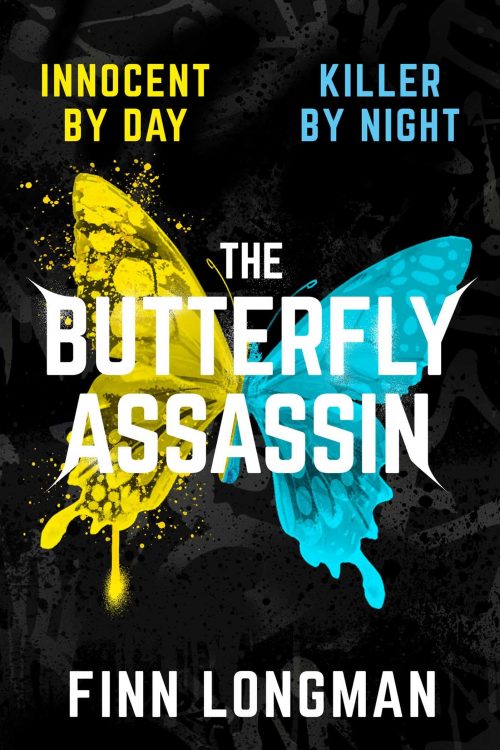 The Butterfly Assassin by Finn Longman

Published: May 26th 2022 by Simon & Schuster YA Books
Rating: ★★★★½ (4.5)
Genre: Young Adult // Thriller, Mystery
Quick Thoughts: A haunting and unputdownable novel that takes flight with hypnotic characters and a storyline with razor-sharp thrills.

Innocent by day, killer by night: a dark, twisting thriller about a teen assassin’s attempt to live a normal life.

Trained and traumatised by a secret assassin programme for minors, Isabel Ryans wants nothing more than to be a normal civilian. After running away from home, she has a new name, a new life and a new friend, Emma, and for the first time in Isabel’s life, things are looking up.

But old habits die hard, and it’s not long until she blows her cover, drawing the attention of the guilds – the two rival organisations who control the city of Espera. An unaffiliated killer like Isabel is either a potential asset . . . or a threat to be eliminated.

Will the blood on her hands cost her everything?

From Finn Longman, an exhilarating new voice in YA fiction, comes an addictive new blockbuster series for fans of global phenomena The Girl with the Dragon Tattoo, Killing Eve and The Hunger Games.

When The Butterfly Assassin arrived on my doorstep (thanks to the Simon YA team!) I was immediately intrigued by the premise of the novel. I wasn’t sure whether to start it or another two novels I received around the same time, and thanks to an Instagram poll, the good people voted that I dive straight in—and the excitement only went up from there.

Isabel Ryans wants out. Out of her old life, her family—out from underneath the thumb of being an assassin. Raised and trained to be a professional killer under the guidance and horror of her Parents—a poison-making father and killer mother—Isabel has been through a lot for her age. She slips away one day and doesn’t look back, fleeing from home with a new name with the hopes of starting a new life as a civilian. But escaping came at a price, and before she knows it, she’s hurled into danger that she can’t recall being in.

Immobilised with pain, Isabel has few options. But at her new school, surprise connections have gotten her friends for the first time in her life, ones that help her to try and overcome the chaos she’s deep in. But when her cover is blown, it’s only a matter of time before the domino effect takes aim, and she’s left with only two choices—go back to the people that made her this way, or fight against them with people just as sinister.

Overall, The Butterfly Assassin was everything I hoped it would be and more. It’s been such a long time since I’ve read something this nail-biting and edge-of-your-seat, action-packed and full of twists. The character development of Isabel was greatly depicted and I loved that the author, Finn Longman, gave an authentic and powerful portrayal of carrying pain with you. I did find the book slow at the start and slightly confusing as I grappled with the world-building, but as the book progressed, it became second nature and I got fully submerged in the new landscape world Isabel resides in. This was such a haunting and unputdownable novel that takes flight with hypnotic characters and a storyline with razor-sharp thrills. Packed with surprises at every turn, The Butterfly Assassin is a book not to be missed—I cannot wait to read the follow-up novel next year! An amazing 4.5 star novel.

Finn Longman is a queer disabled writer and medievalist, originally from London. With an MA in Early and Medieval Irish and a BA in Anglo-Saxon, Norse and Celtic, they spend most of their time having extremely niche opinions on the internet. They write YA and Adult novels, and have a particular interest in genre-bending fiction that explores identity and tests moral boundaries. The Butterfly Assassin is their debut novel, with a sequel to follow in 2023.

Have you read The Butterfly Assassin?