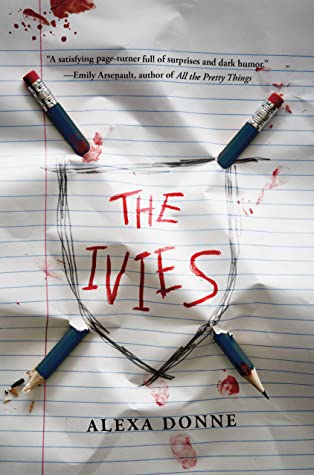 The Ivies by Alexa Donne

About The Book: Everyone knows the Ivies: the most coveted universities in the United States.

Far more important are the Ivies. The Ivies at Claflin Academy, that is. Five girls with the same mission: to get into the Ivy League by any means necessary. I would know. I’m one of them. We disrupt class ranks, club leaderships, and academic competitions…among other things. We improve our own odds by decreasing the fortunes of others. Because hyper-elite competitive college admissions is serious business. And in some cases, it’s deadly.

Alexa Donne delivers a nail-biting and timely thriller about teens who will stop at nothing to get into the college of their dreams. Too bad no one told them murder isn’t an extracurricular.

Anyone that knows me is aware that as soon as it hits September, I’m straight into the darker/spooky books! But as I had this little gem sitting on my TBR stack at the end of summer, I thought that I’d read it sooner, since it seemed to be calling to me. I’m only *just* getting to sit down and write this review, but I’ve been sitting on these thoughts for almost 2 weeks!

The Ivies are the most prestigious, highly-wanted Unis in the USA. Even me, being British to my core, knows that they exist, and are some of the most talked-about, made-movies-about schools out there. But this book isn’t just about the Ivies as academic places. No, this story quite immediately revolves around the Ivies: five girls with a common mission in life. They want to get into the Ivy League, and would quite literally do anything to get into them, no matter who stood in the way. But what they anticipate as their golden plans of ruining other people’s chances at getting in to make their applications look better, doing all the low-cost dirty work that it entails, will end in a way none of them could have planned.

Every mean girls group needs a leader, and of the five girls, Avery seems to take that position very seriously. And as the girls individually are supposed to apply to different Ivy Leagues – never the same as each other, to maximise their chances of getting in to those schools – it all goes wrong when clique-leader Avery doesn’t get into Harvard, her chosen school. But when she realises that Emma, one of the other girls, applied – and got in – she blames her for the failure. Our main character, Olivia – one of the other girls – tells the story through her eyes. She watches the whole thing unfold, secretly holding her own cards to her chest – she also applied to Harvard and got accepted, but she makes it apparent to herself that telling Avery is a big no. Only, when Emma turns up dead, Olivia’s life is thrown into chaos. She no longer trusts Avery, and after finding out the other girls have been doing a lot behind each other’s backs, doesn’t know if she can trust them, either. And when it’s obvious the police aren’t going to look into it as much as she could, she decides to dig into the truth herself with the help of the very-cute Ethan to get to the bottom of it.

Overall, The Ivies promised elite scandal, murder and edgy vibes and it absolutely delivered. Whilst it did have a slow start, as soon as the plot kicks into overdrive with the death of Emma, it picks up majorly and gets juicy. I could literally not put this down the last week of August, even though I was definitely meant to be doing other things. If you’re looking for something darker, cut-throat, and addictive to read, The Ivies will be right up your street. Huge four star read!

Alexa Donne is the author of Brightly Burning and The Stars We Steal, YA sci-fi romance retellings of classics set in space out now from Houghton Mifflin Harcourt. Her next YA, THE IVIES, a thriller set in the world of competitive college admissions, will be out in May 2021 from Crown/Random House. A graduate of Boston University, she works in TV marketing and has done pro bono college admissions mentoring since 2014. A true INFJ, in her “free” time she mentors with WriteGirl, runs the Author Mentor Match program, and manages one of the most popular writing advice channels on YouTube. She lives in Los Angeles with two fluffy ginger cats named after YA literature characters. You can find her in most places @alexadonne. 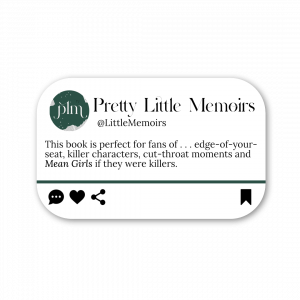 Have you read The Ivies?

If you haven’t, don’t forget to add this thrilling book to your TBR!