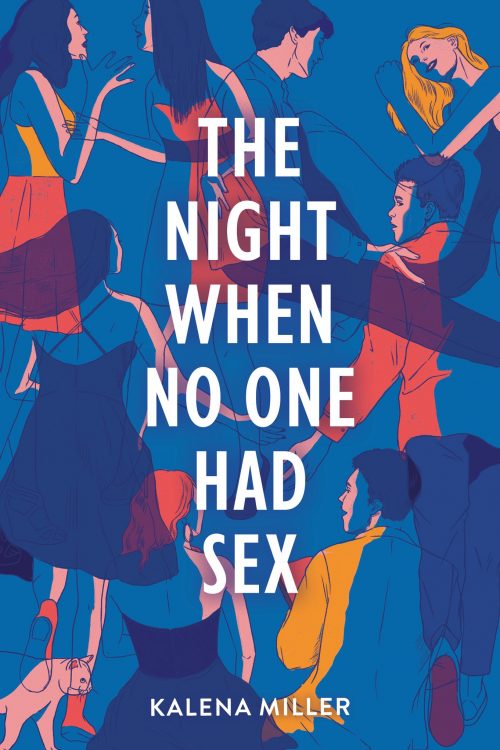 The Night When No One Had Sex by Kalena Miller

Add to Goodreads
I bought this book myself, non ad/gifted. There was no obligation to post/give this book a certain rating. This gifting in no way alters my review and I remain impartial.

About The Book: It’s the night of senior prom, and eighteen-year-old Julia has made a pact with her friends. (Yes, that kind of pact.) They have secured a secluded cabin in the woods, one night without parental supervision, and plenty of condoms. But as soon as they leave the dance, the pact begins to unravel. Alex’s grandmother is undergoing emergency surgery, and he and his date rush to the hospital. Zoe’s trying to figure out how she feels about getting off the waitlist at Yale–and how to tell her girlfriend. Madison’s chronic illness flares, holding her back once again from being a normal teenager. And Julia’s fantasy-themed role play gets her locked in a closet. Alternating between each character’s perspective and their ridiculous group chat, The Night When No One Had Sex finds a group of friends navigating the tenuous transition into adulthood and embracing the uncertainty of life after high school.

I’ve been wanting to read The Night When No One Had Sex for so long. It’s sat on my TBR stack patiently for the last month or so, and since I was in the mood for a change in pace/genre from the last few books I’ve read, I thought it was the perfect time to start!

We pick up the novel just as the friend’s senior prom has ended, and they’re headed somewhere to continue the golden glow of the night and make some memories. Namely, to move things in their relationships to the next level. Julia—the founder of the “sex pact” with her friends—can’t wait to be with her boyfriend, Kevin. Twins Morgan and Madison are there, too, with their significant others. Morgan and her girlfriend Zoe are already sexually active, but tag along for the stay at Zoe’s Uncle’s cabin for the night, anyway. Madison, who is chronically ill with Lupus, is there with her boyfriend Jake. Alex is supposed to be there, but then he finds out his grandmother has been rushed to hospital, so his plans get diverted elsewhere, but we still follow along with his POV as his date, Leah, becomes more than just a random set-up.

There are quite a few different POV’s in the book that I found were really individualistic and each held their own personality. I’d say of all the friends POV’s, Julia’s and Zoe’s were my favourites, Alex’s being a close third. As the night progresses and their plans get thwarted by multiple disasters like getting locked in a closet, losing Zoe’s Uncle’s cat outside the cabin, and a chronic illness flare among other things, the night seems to be going exactly the opposite of everything Julia and her friends wanted. But along the way, there are huge learning curves, massive character development, revelation moments and a ton of laughs.

Overall, I thought that The Night When No One Had Sex was a thrill from start to finish. Although I won’t stand for cat-slander at all (I know it’s fiction, but every time they called the cat awful names, I was furious 😂) it was such a refreshing, event-filled night adventure of friendship, realistic characters and a whole lot of teenage shenanigans. It had LGBT and Korean rep characters and chronic illness rep that I thought was added/written extremely well as someone who is also chronically ill. I did find that some parts were much slower than I’d have liked, but as a whole, the book was in a league of it’s own—I highly recommend it to older YA readers looking for something with friends that feel like your own. 4.5 stars!

Kalena Miller is a writer, teacher, editor, and scone enthusiast. She currently lives in Minnesota with her husband and lovable, if slightly neurotic, dog. When she isn't writing, Kalena enjoys tap dancing, scrapbooking, and watching an embarrassing amount of reality television. Her debut YA novel, The Night When No One Had Sex, is available now! Her debut middle grade novel, Break a Leg, Shannon Carter! is forthcoming from Delacorte Press (PRH) in Spring 2023.

Have you read The Night When No One Had Sex?

If you haven’t, don’t forget to add this fun-filled book to your TBR!