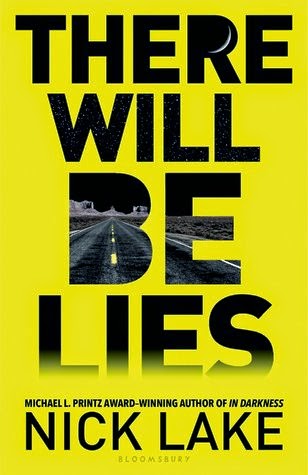 Title: There Will Be Lies

I received this for review from Bloomsbury for review. As always, my reviews are fair and un-bias.

It’s just Shelby and her mom, Shaylene, a court stenographer who wears pyjama jeans, stitches tapestry, eats ice-cream for dinner and likes to keep Shelby safe. So safe she barely goes out. So safe she doesn’t go to school. Because anything could happen, to a girl like Shelby. Anything.

When Shelby gets knocked down by a car, it’s not just her leg that’s broken: Shelby’s world is shattered. Her mom turns up to collect her and drives off into the night, like it’s the beginning of a road trip, like two criminals on the run, like Thelma and Louise or Bonnie and Clyde. And somehow, everywhere she looks, there’s a coyote watching her, talking to her, telling her not to believe.

Who is Shelby Jane Cooper? If the person who keeps you safe also tells you lies, who can you trust?

Shelby Jane Cooper has led a pretty sheltered life so far. At home it’s just her and her mother; Shaylene. Shelby’s Mom likes to keep her safe, like any mother wants of their children – but with Shelby, it’s pretty different. Shaylene likes to keep Shelby so safe that she doesn’t go to school or barely goes outside to do anything, too terrified that something will happen to a girl like her. On one of the few outings Shelby is allowed, she is hit by a car and suddenly everything comes to a halt. Her leg is broken, and now everything else seems to be too.

Setting off out of town, Shaylene pulls her daughter into a road trip. The overprotective mother that Shelby had mixed feelings about – whether she accepted the safety and understood her mother or craved more freedom – became clear that this was more than just a road trip. They were on the run.

Now everything seems different to Shelby. Everywhere she looks, there’s a coyote watching her and taunting her, telling her things. Her dreams are wild and inquisitive, telling her things to believe. The storyline picks up right away, setting a scene for thrills and a story with layers you’ll love to delve into.

I was won over by the enthralling enticement for There Will Be Lies, into the darkness of the lies and secrets hidden inside Shaylene and Shelby’s lives. At times it reminded me of something straight out of a movie like Gone Girl or Before I Go To Sleep, the tension and exhilarating storyline twisting into an explosive conclusion.

Overall, There Will Be Lies is a book you don’t want to miss, thriller fans. You’ll be surprised, like I was, at the carefully crafted characters and significance of Coyotes and dreams that uncover the meaning of Shelby’s story. If you love psychological thrillers and stories that keep you on the edge of your seat, scoop up this and read just how amazing it truly is.

For fans of S.J. Watson and Gillian Flynn – you will love this.

What did you think of There Will Be Lies?

Did you think it was as thrilling as I did?