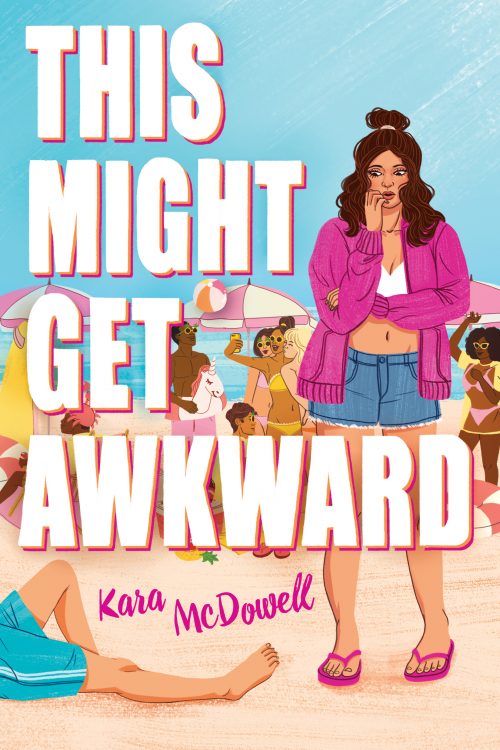 Sophie Kinsella meets Sarah Dessen in the most hilarious, romantic book of the summer about a girl with social anxiety and the boy who refuses to let her hide herself away.

Seventeen-year-old Gemma’s favorite kind of beach is an empty one. Social interactions are too much for her to handle. She always says the wrong thing—if she manages to say anything at all. She can’t even bring herself to speak to her longtime crush, Beau Booker, without losing sleep over her own awkwardness.

During a solo outing to her favorite beach, Gemma realizes—to her horror—that the popular kids from school have shown up to throw a party. Before she can sneak away (and possibly puke behind her car) Gemma is pulled into the action and ends up talking to Beau, who asks her to pretend that they’re “close.” Gemma is too flustered and flattered to refuse, and mostly, she’s wondering why Beau is talking to her at all . . . right up until the moment when he falls off the boat, hits his head, and ends up in a coma.

After rescuing Beau from the water, Gemma is mistaken for Beau’s girlfriend by his friends and family, including his mysterious older brother, Griff, who has returned to town after a year away. Gemma tries to correct the record, but her social anxiety (and a nosy reporter) gets in the way at every turn. Before she knows it, she’s in too deep to backtrack. And when Beau’s warm, boisterous family pulls Gemma into their orbit, she realizes how much she wants to keep them in her life.

For the first time, Gemma has everything she’s ever wanted: friends, big family dinners, and Griff—a boy who she can be herself around. But how can she embrace her new dream life when everything is built on a lie?

When I read One Way Or Another last Christmas, it blew me away. I was completely fascinated with Kara’s writing and storyworld. As soon as I saw she was coming out with another book, I immediately pre-ordered it, eagerly awaiting its arrival on my doorstep!

We meet our main character, Gemma Wells, on the beach. She has social anxiety (which was super refreshing to see, as I have the same exact thing) and likes her alone time to think and be by the water, her favourite thing. But the beach turns out to not be as deserted as she was hoping it would stay, and soon enough, a party breaks out. Beau Booker, her long-time crush-from-afar, is there. He randomly asks her to “pretend they’re close”, leading Gemma to become confused. Only, when Beau falls off a boat and hits his head—ending up being put in a coma—things go from crazy to downright insane.

But because Gemma was the one that saved Beau, and some mixed-signals between his friends and her lack of denial, Gemma is mistaken for Beau’s secret girlfriend. She gets flustered because of her social anxiety, and before she knows it, the Booker family are pulling her into their tightly-knit unit, welcoming her with open arms so sweetly that she feels at home. The thing is, when Beau’s older brother Griff shows up—after being gone for the longest time, rumours of affairs and scandals that follow him like clouds—Gemma can’t help but form a connection to him, despite her crush on Beau. He’s not the guy that she’s heard of in whispers, and when he offers to help her conquer some of her social anxiety fears, their bond only strengthens, leading Gemma to feel torn between what she thought she wanted and who she really is.

Overall, This Might Get Awkward was everything I hoped it would be: hilarious, honest and romantic. I loved that Kara explored the themes of social anxiety with care, and I saw many qualities of myself and my struggles with it in Gemma’s actions and thoughts. I haven’t actually ever seen While You Were Sleeping (I know, I NEED to go and see it right now!) but as a sort-of retelling of it, I think it definitely captured that movie-like quality, and would make a perfect movie (hopefully) one day. Gemma and Griff’s relationship was so innocent and I adored the way he cared about her. Gemma’s relationship with her dad was also so lifelike and refreshing. I also loved how side-character Sofía’s mental health struggles meant she understood Gemma better than her past friends. For me, this was an exemplary novel about anxiety, the sincerity of true friendship and having faith in yourself—and others—despite fallacious notoriety. Five stars doesn’t feel like enough. Read it, read it, read it! (It’s the perfect springtime book.)

Born in the mountains and raised in the desert, Kara McDowell spent her childhood swimming, boating, and making up stories in her head. As the middle of five children, Kara entertained her family on long road trips by reading short mystery stories out loud and forcing everyone to guess the conclusion. After graduating from Arizona State University with a BA in English Literature, Kara worked as a freelance writer. Now she writes young adult novels from her home in Arizona, where she lives with her husband and three young sons.