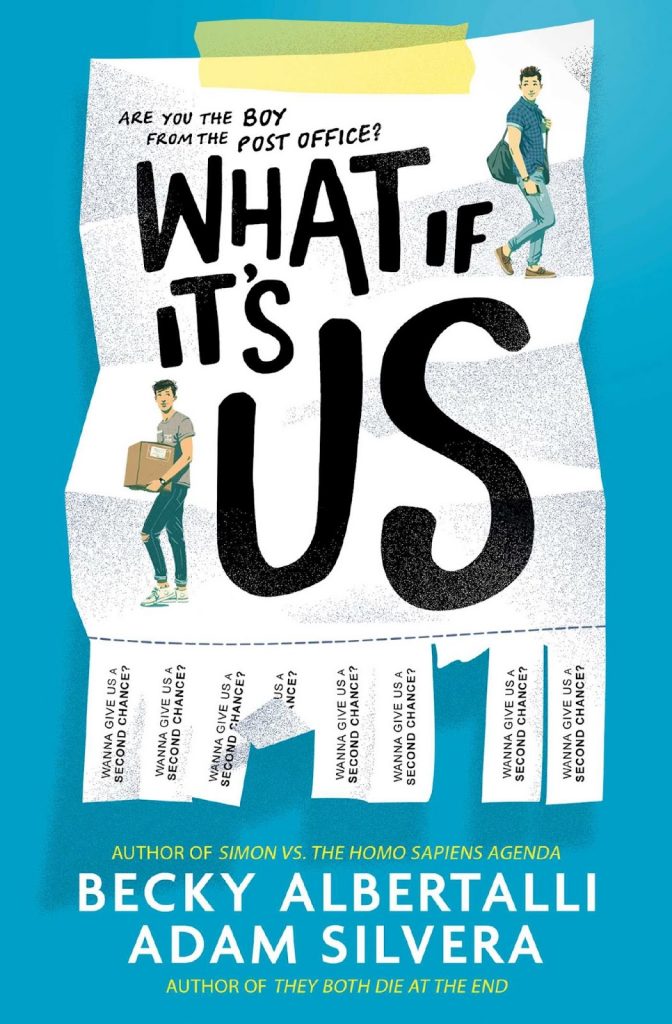 Arthur is only in New York for the summer, but if Broadway has taught him anything, it’s that the universe can deliver a showstopping romance when you least expect it.
Ben thinks the universe needs to mind its business. If the universe had his back, he wouldn’t be on his way to the post office carrying a box of his ex-boyfriend’s things.
But when Arthur and Ben meet-cute at the post office, what exactly does the universe have in store for them?
Maybe nothing. After all, they get separated.
Maybe everything. After all, they get reunited.
But what if they can’t quite nail a first date . . . or a second first date . . . or a third?
What if Arthur tries too hard to make it work . . . and Ben doesn’t try hard enough?
What if life really isn’t like a Broadway play?
But what if it is?

It’s not every day that a book as incredible as What If It’s Us gets posted through my letterbox. But you know what? I am SO. DARN. THANKFUL for Olivia at Simon and Schuster for sending this gorgeous book into my life, because it just so happens to have stolen my heart and run away with it. . .

I’m going to do it. I’m going to tell you just how incredible this book was in the first opening line. THIS BOOK IS EVERYTHING. What If It’s Us has exceeded my expectations and within just halfway through the book, I was already thinking it: this might just be the best book I’ve read all year. And it’s September. I’ve read a lot of books this year. Counting ones I haven’t reviewed yet, that’s almost 40 books. And this one just walks out, steals my heart and runs away with all it’s cuteness and gah. I can’t even put it into words. But I’m going to try. . .
The book is told in two POV’s: Arthur’s and Ben’s. Arthur is only in New York for the Summer and he’s already overwhelmed by everything. He’s helping out where his Mom works and doing things like coffee runs and mailing things at the post office. That’s where Ben comes into it. Arthur and Ben’s worlds collide when they run into each other at the Post Office and get talking. They have this instant connection, talking about the universe and their words just free-flow so easily with each other. But then they get separated by the crowd and all Arthur has is a snippet of a name from the box Ben was mailing – to his ex-boyfriend.
Ben has just had his heart broken, but when he meets Arthur, it’s like the universe is giving him something again. But as soon as he thinks there might be something, they’re separated. They’re both beginning to think that the universe has it out for them until they’re reunited by some sleuthing on the internet on Arthur’s end.
They have date after date, but they can’t really nail that perfect first date. So they replay that first-date-feeling over and over until they get it as perfect as perfect gets. But self-doubt and life keeps cutting their worlds further apart and when they both feel like they’re trying, the other feels let down. The sudden whirlwind summer comes crashing down and faced with the outcome, it’s make or break for their finale in their Broadway play of romance.
Just WOW. I can’t imagine anyone hating this book. Like ever. There’s cute-as-ever Arthur and funnier-than-funny Ben, and putting them together you get this couple that’s just breathtaking. Becky and Adam write their romance so honestly and gorgeously that it’s like I’m reading a Netflix rom-com. I was swept up in a love story so bright and beautiful that the real world fell to petals around me and everything became What If It’s Us.
Overall, you need this book in your life. Everyone does. Not a romance lover? You will be after this book. This book is honestly a game-changer. What If It’s Us has been my favourite book of the year and is in my top ten favourite reads of all time, just like that. You have no idea just how validly perfectly-unperfect this novel truly is until you open the pages. Five huge stars!

You can buy WHAT IF IT’S US here:
Amazon | Waterstones | Book Depository

Have you read What If It’s Us? Are you looking forward to it?