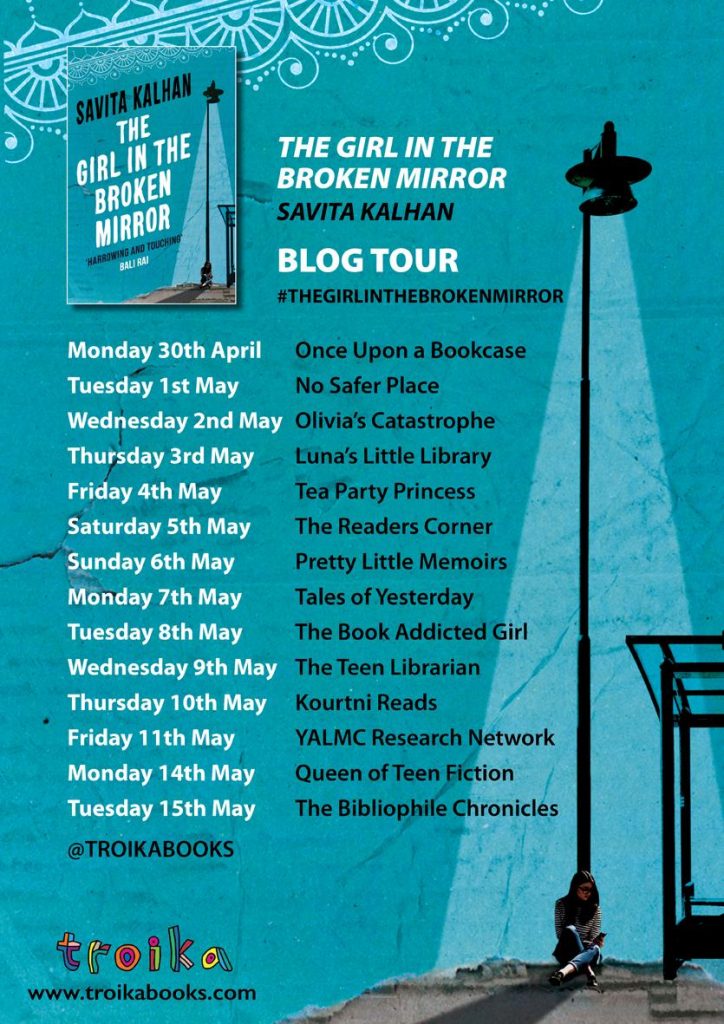 Hello, book lovers! I am so honored to bring you The Girl In The Broken Mirror today. I devoured this book entirely and there’s no doubt in my mind you’re going to feel the same way. Today on Savita’s blog tour, I’ll be reviewing the book and sharing a playlist! 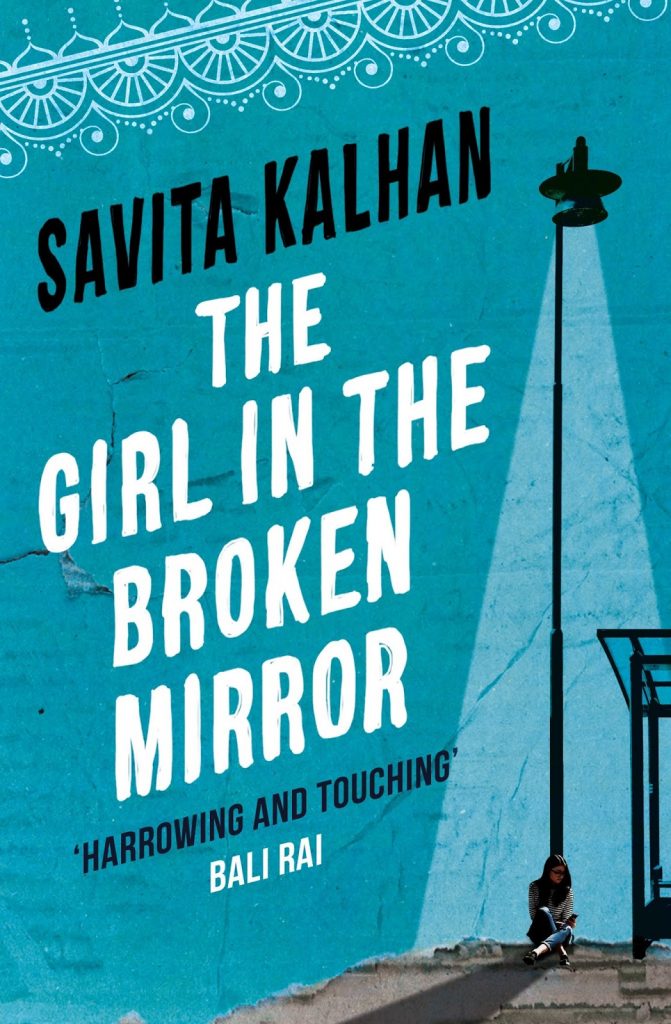 Title: The Girl In The Broken Mirror

Jay’s creative writing exercise is to write a fairy tale, to end with they lived happily ever after.
But the way her life is panning out she’s not sure it will ever reach that stage. She and her mother are moving in with distant relatives, and they have super strict rules for girls. Jay is expected to have only Indian friends, if she has any at all. How can she see her school friends, Chloe and Matt? But this is only the beginning of a nightmare for Jay.
When her life implodes, how can she hide the shame and how will she find a way to keep going?

When Savita reached out to me with her book, I just couldn’t take my eyes off it. I saw the words Harrowing and Touching on the cover, and that just makes me FEEL like I’m in the book. These certain keywords lure me into the book, because who doesn’t love a book that makes your heart feel it?

Spoiler free. Just a few pages in, and I’m hooked. No. I mean it! I sat down to read The Girl In The Broken Mirror a little after it arrived on my doorstep and opened the cover for a little while and the rest is history. Jay’s perspective is so clear-cut, so vivid and open, I felt like she was talking to me. The book deals with some heavy topics, including Rape, and I think that Savita dealt with these topics about shame, finding a place in this world and trusting others, with such grace and delicate consideration.
Jay, our main character, gets a creative writing assignment to write a fairytale, you know, with the whole happy-ever-after and etc. But the thing is, Jay can’t imagine it. Her life isn’t what she wants it to be, feeling overshadowed by what her Mother thinks her life should be. When they move in with distant relatives, it’s worse. They’re strict, especially when it comes to girls. She’s not supposed to have any friends that aren’t Indian, but that doesn’t stop her from wanting to be with her school friends, Matt and Chloe. Her life starts to spiral after events that halt her existence, and she’s forced to watch her life implode, while trying to gather the courage to move forward.
Overall, The Girl In The Broken Mirror was a breathtaking YA novel with so. much. emotion. I found myself tearing up for Jay, her story tugging at my heartstrings. I’m actually at such a loss for words. I’ve recommended this book to three of my friends so far, and I don’t just hand out recommendations like it’s nothing. If I say it’s good, I mean it, it’s that good. Savita has quickly climbed a list of Authors to Watch for me, and I can’t wait to see what she writes next. Huge five-star novel. 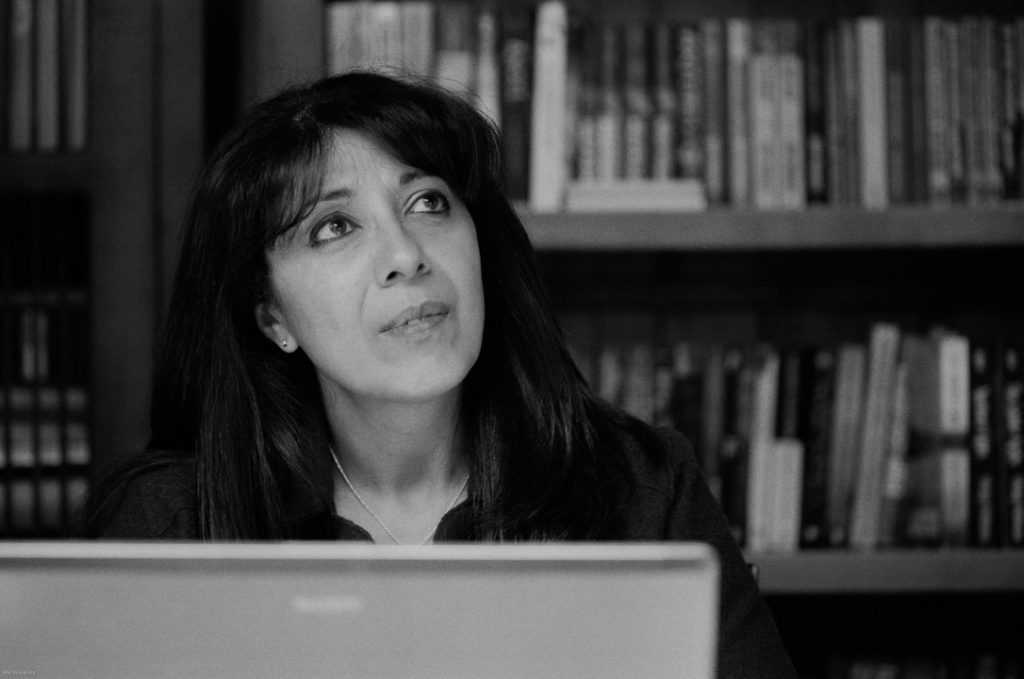 Savita Kalhan was born in India, but now lives in the UK and studied at the University of Wales. She has travelled extensively, and lived in the Middle East for several years, where she taught English. She is keen on tennis, boxing and running. She is an avid allotmenteer and somehow manages to fit in some writing, reading and blogging too! She now lives in North London with her husband, her son, and her lion of a cat, Marley.


Soundtrack to The Girl in the Broken Mirror

Hi Becca, thank you for inviting me on your blog today! It’s so exciting to be here, to have a book out there in the world, in readers’ hands! And to top it – I got to compile the soundtrack for it, too. So here it is – the soundtrack to The Girl in the Broken Mirror. It’s a mix of songs that feature in the book, and songs that Jay loves, her parents used to play, and the music played at her uncle’s party.
Have a listen and then when you get to the end, you’ll see I’ve set a little challenge for you all. . . I’ll give you a clue: it’s about Matt, Jay’s best friend in the book.

Rolling in the Deep by Adele
Jay loves Adele. If she was allowed to go to a concert, she would go and see Adele sing live in a heartbeat. She blasts this song out loud on top volume after her mum has given her the terrible news that they are moving in with her uncle and aunty in 42 Primrose Avenue. Jay knows her life is about to change forever – and not in a good way. Her aunty is super-strict and very traditional, which for Jay spells bad news. She’s about to lose all her freedom.

1942 A Love Story. This song is considered to be one of the most romantic love songs in Bollywood. It was Jay’s parents’ song. Jay’s mum Neela doesn’t play it after her husband’s death because it brings back too many memories of her husband, of the time when she was the happiest.

The Eye of the Tiger by Survivor, from the soundtrack of Rocky. Deven plays this song when he is working out in the gym. It’s a favourite amongst some Asian men. It’s not mine! In fact I don’t like it all.


Jai Ho by A R Rahman. Since the release of Slumdog Millionaire, this song has become iconic. It’s played at most parties and weddings, and has everyone on their feet.


Thori Thori by PBN and Raj Bains – the boys always hit the dance floor when this is played!


Someone Like You by Adele. The ultimate break-up song. If Jay was playing music when she saw Matt and Chloe together, this is the song she would have played.

Anywhere by Rita Ora. Sitting in the basement room of No.42 Primrose Avenue, this is the song that Jay thinks of as her and Matt’s song as she dreams of a living far away, living a different life.


Here’s the challenge to all your readers – what would Matt’s top five songs be? If you’ve read the book then you’ll know what Matt’s like, but basically, he’s pretty cool!

I’d love to hear of any other songs that your readers think would fit in with the book?

Please write them in the comments section below – or tweet me @savitakalhan with the hashtag #thegirlinthebrokenmirror #mattssongs.

Becca, thank you so much for having me here – it’s been so much fun! I hope you all love the book!

It’s been amazing! Have you read The Girl In The Broken Mirror?

Let me know in the comments, or join in the conversation on Twitter!