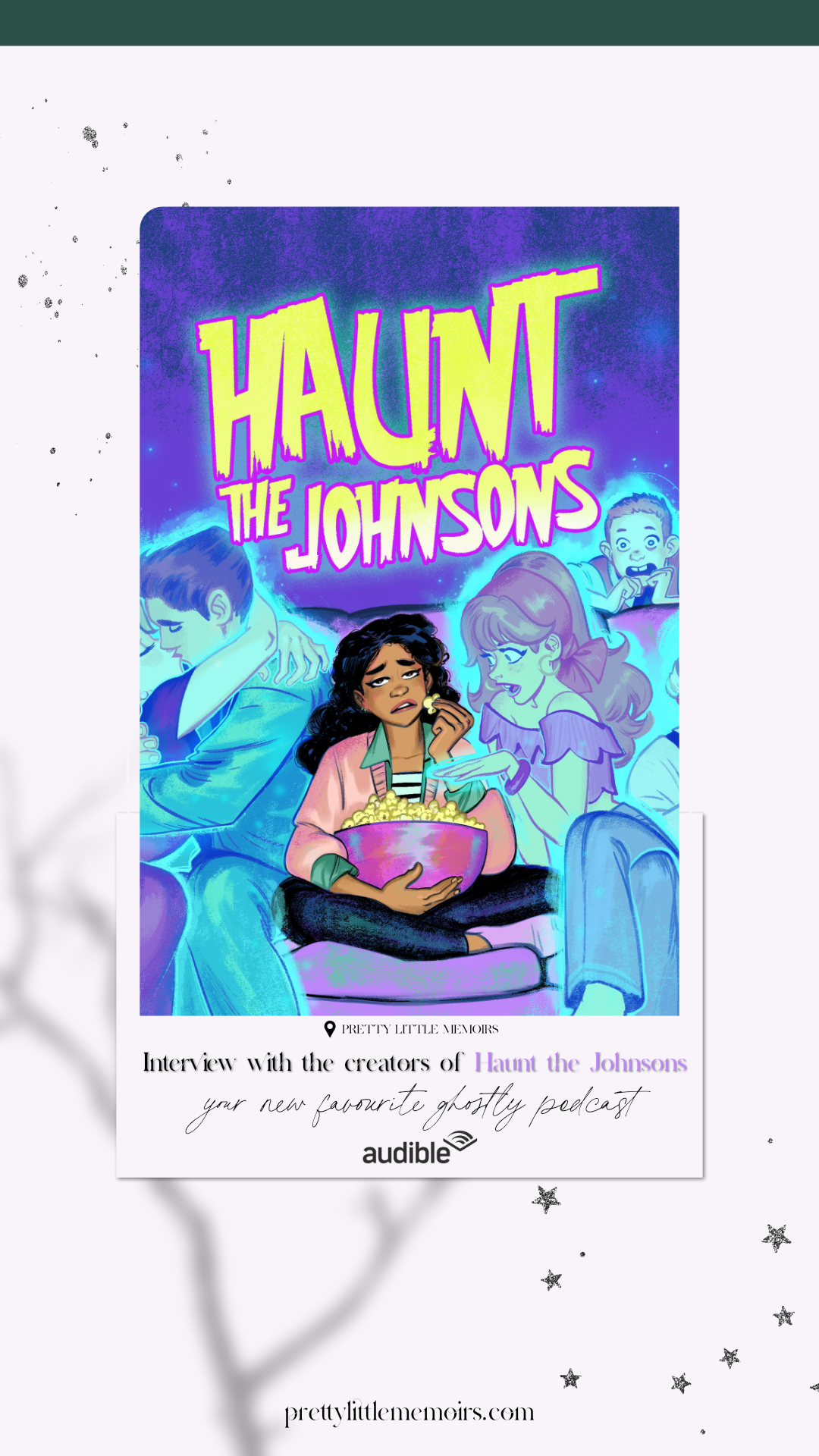 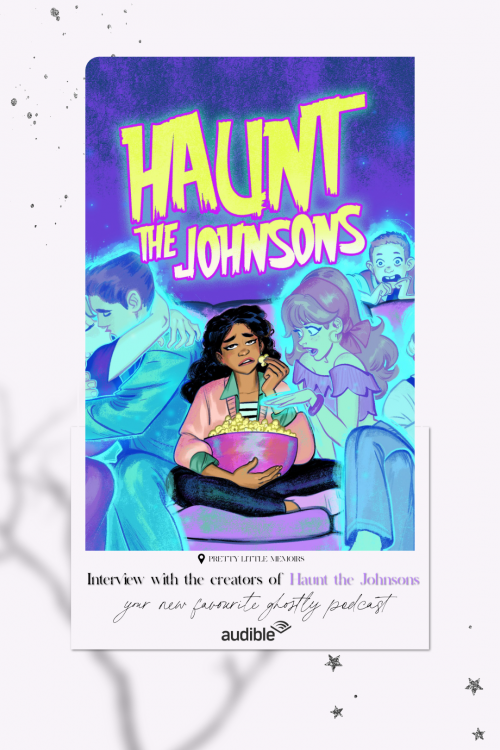 It's the spookiest time of year again, and I've got your new favourite obsession right here...

So, what’s it about? An over-achieving teenager in New York City, Luna Johnson (Aisha Dee, “The Bold Type”), accidentally becomes a medium and starts to crack from seeing ghosts everywhere. When she confides in her psychologist parents, they assume it’s a mental health crisis and move the family to the small town of Doodstad, New York, unbeknownst to them, into a house with five neurotic ghosts in the most haunted town in America. Back to hiding her powers from her parents, Luna sets out to learn more about ghosts along with what being a medium truly entails. As she begins to fall in deeper with the out-of-life crowd in Doodstad, mysterious forces are keen to stop Luna from helping the ghosts. 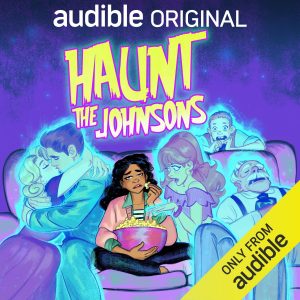 I talk with creators Mandee and Joel to ask the well-needed questions for you. . .

What was the inspiration behind the creation of Haunt The Johnsons?

MANDEE: Joel and I were brainstorming ideas for audio series to pitch around, and we thought it would be so funny to include one about ghosts since ghosts are such a visual thing. All through development, we were amused by the idea of an audio-only show about ghosts, and then in post-production, the joke was really on us when our studio asked us the million-dollar question: what do ghosts sound like?

JOEL: In addition to amusing ourselves with the idea of ghosts over audio, we ended up enjoying the idea of centering the story around a teenager who really has herself together. Basically, sharing the idea of her being constantly frustrated by ghosts and adults in her life, who are a bit much. We related to that, feel like that teenage alienation and frustration lingers into adulthood.

MANDEE: We also thought it would be entertaining to explore the idea of ghosts being excited about someone moving into their home after 30+ years of it being empty due to a murder. These five ghosts can’t leave the property – they’re stuck where they died, forever roommates whether they like it or not. So, instead of wanting to scare the new owners away, they are just so happy to have someone new around.

Has the idea behind the show changed from when you first got together to write it?

MANDEE: The show was initially pitched as more of a sitcom format without a series-long adventure. However, we shifted the overall series to be more comedy-adventure-focused through the development process, which helped open up the world and create our silly universe.

JOEL: Once we realized we had a whole new world to build and had taken on ghosts, we had a lot of fun making up all the rules and complications for our lead, Luna, and the ghosts to deal with. You get to make up a lot of fun things when it’s a supernatural world.

MANDEE: We made up so many silly ghost rules. For instance, they can’t sleep, but they can smell!

Did you have any voices in mind for the characters before the roles were cast?

MANDEE: We knew we wanted someone smart, confident, witty, and sarcastic to play Luna. Aisha Dee’s voice accomplishes all of those emotions so easily, and she gives Luna so much life.

JOEL: We also knew we wanted to get Natalie Palamides in the mix since there’s really nothing she can’t do character-wise. And we were hoping to have a bunch of other funny comedians and comedic actors we know to be involved somehow. Langston Kerman and Shalita Grant brought new things to their roles as Luna’s parents and added so much humor and heart to the series.

MANDEE: Yeah, bringing in the comedy community was really important to us. Probably the earliest voice in mind was for Shannon-Marie. We always heard Kristen Schaal when writing her. Maybe it’s because we work with her frequently, but we were so happy when she agreed to do the show.

In “Haunt the Johnsons,” some of the ghosts are far from what we usually believe spirits are, like the tropes in most horror movies. Do you think that ghosts can actually be funny or have humorous personalities like in your show?

MANDEE: We would like to think ghosts reflect who we are as humans, with more variety in personality. Plus, building out “The Most Haunted Town in America” would be so dull if all ghosts were really just the same.

JOEL: I think I mostly just wanted to explore a non-scary idea of ghosts. We tried to explore what the funny version of a ghost would be.

MANDEE: When creating our ghost world, we focused on what we thought would keep people stuck. All of the ghosts in the show are neurotic in one form or another.

MANDEE: This allowed for many intense personalities and motives that could bounce off each other. The ghosts are always obsessed with the wrong thing; they lack focus and forget everything except whatever they’re most obsessed with at any given moment. Their ever-changing energy allows for a lot of humor, frustration, and silly storylines.

Do you have any plans for a second season podcast of Haunt the Johnsons? And if yes, do you have a plot in mind already?

MANDEE: We would love to do another season of the show! Luna is such a great heroine who is flawed but does her best to handle everything while getting good grades.

JOEL: By the end of the season, there are some shifts in what Luna’s dealing with and who’s in the loop. There’s definitely more humorous complications for her and more story there. We like the idea of continuing to throw things at Luna to frustrate her and see her eventually figure it out.

MANDEE: Without giving away too much of the season one story… It will be fun to explore what Luna does now that’s she’s figured some stuff out, made some friends, and didn’t fail history. But, of course, she will always be risking everything in her attempts to do what she thinks is the right thing, and that’s really the best part of adventure stories.

I binge-listened to the entire show all weekend and absolutely enjoyed it—I know it’s going to be adored by Young Adult book lovers now that podcasts have become so widely loved by the community. Has it been fun hearing people’s reactions after all your hard work so far?

MANDEE: Our first binge listen! That alone is exciting! We’ve lived with the show for so long, and now that we finally get to share it with the world, it’s incredible to hear people’s reactions! It’s so fun to be able to share this epic YA adventure with the world.

Of course, our first question is always… did it make sense? With the layers of real people and ghosts in audio, we worked hard to make it easy for the listener to understand who was living and who was floating.

JOEL: Just to be clear, all the actors are real people. Unfortunately, we don’t know how to speak with the afterworld and get them to voice act… Yet.

MANDEE: We hope people love Luna as much as we do and want to follow her through this ghostly journey.

JOEL: I’m also looking forward to how any ghost-enthusiasts react. Ready to argue about ghost rules!

Thank you so much for speaking with me—I can’t wait for everyone to listen to the show when it airs on October 7th, exclusively by Audible Originals.

MANDEE: Thank you for listening!

JOEL: Ghosts over audio is a thing! Who knew?!

Listening to Haunt the Johnsons felt like hearing a comedy-supernatural YA book out loud, totally converting me to listening to more podcasts. And if it does come back for a season 2 – you can bet I’ll be first in line to listen. I can’t recommend it enough, especially at this time of year! For the autumnal car rides, quiet days in your room and Halloween-nights, don’t forget to bless your ears with this ghostly goodness from October 7th 2021 on Audible. When can I re-listen already?