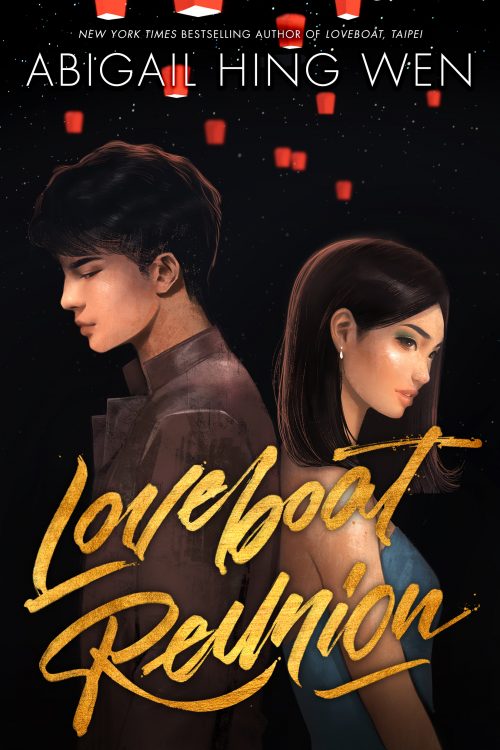 Sophie Ha and Xavier Yeh have what some would call a tumultuous past.

At least they’re friends now. They’ve left the drama behind them back in Taipei—at their summer program, Loveboat—forever.

Now fall is here, and it’s time to focus on what really matters. Sophie is determined to be the best student Dartmouth’s ever had. Forget finding the right guy to make her dreams come true—Sophie is going to make her future happen for herself. Xavier, on the other hand, just wants to stay under his overbearing father’s radar, collect his trust fund when he turns eighteen, and concentrate on what makes him happy, for the first time ever.

But the world doesn’t seem to want Sophie and Xavier to succeed. Sophie’s college professor thinks her first major project is “too feminine.” Xavier’s father gives him an ultimatum: finish high school or be cut off from his inheritance.

Then Sophie and Xavier find themselves on a wild, nonstop Loveboat reunion, each trying to resist the chemistry that originally led to them to combust. As they grow closer, they hatch a plan to take control of their own futures. Step one? Break all the rules.

Expansive and romantic, glamorous and tender, Loveboat Reunion takes readers back to Taipei through the eyes of Sophie and Xavier, on an unforgettable journey of glittering revelry and self-discovery that’s perfect for fans of Jenny Han and Mary H. K. Choi.

After finishing Loveboat, Taipei, I was SO excited to start the sequel. I read a book in-between, just to feel like I was going back into the world with open eyes and a slightly blank slate to readjust to feeling like this was a new chapter.

Loveboat Reunion picks up near enough where we leave in the first, throwing us back into the lives of Sophie and Xavier. I really liked Xavier’s character in the first book, so I was excited to see more layers to his character. This book definitely feels like more of a level-up for them, a more future-and-focus based storyline that fixates on their lives post-Taipei and where it takes them.

For Sophie, that’s Dartmouth, and being the best student. She has a lot of worries (failure, not feeling like she belongs) that give her character such redeeming and lifelike characteristics, because in the first novel I did feel a disconnect from her, but she did win me over in the sequel. For Xavier, life is a little different. He has to revisit school (because of his dyslexia) to be able to collect his trust fund, as per his father’s ultimatum. His storyline is very much a happiness-based one, trying to figure out what it actually is that will make his future better, and what he wants from it. But when Xavier and Sophie reunite – aka, Loveboat Reunion – the chemistry that they initially had in the first book is suddenly reawakened with a flickering flame. As they grow closer, it becomes apparent that they’re both grappling to come to terms with how their lives are going and come to a decision that shatters all the rules in place.

Overall, Loveboat Reunion was a definite whirlwind read of non-stop surprises, striking yet flawed characters, real life issues and revisits to the sparkling backdrop I loved so much from Loveboat, Taipei. It was one hundred per-cent a sequel that lives up to the hype of it’s predecessor and exceeds it’s magic. A must-read for YA and even New Adult readers. Four stars!

Abigail Hing Wen is the New York Times bestselling author of Loveboat, Taipei, which is being adapted for film by the producers of Jenny Han's To All the Boys I've Loved Before. She holds a BA from Harvard, a JD from Columbia Law School, and an MFA from the Vermont School of Fine Arts, and, like some of her characters, is obsessed with musicals and dancing. When she’s not writing stories or listening to her favorite scores, she is busy working in artificial intelligence in Silicon Valley, where she lives with her family. You can learn more about her at www.abigailhingwen.com. Follow on Instagram/Twitter/TikTok @abigailhingwen

Have you read Loveboat Reunion?

If you haven’t, don’t forget to add this amazing sequel to your TBR!