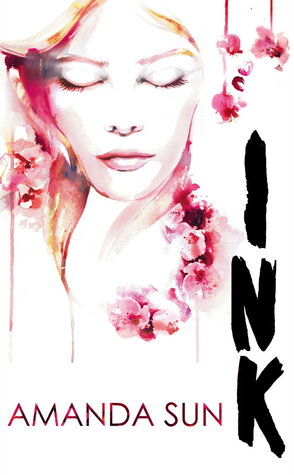 On the heels of a family tragedy, the last thing Katie Greene wants to do is move halfway across the world. Stuck with her aunt in Shizuoka, Japan, Katie feels lost. Alone. She doesn’t know the language, she can barely hold a pair of chopsticks, and she can’t seem to get the hang of taking her shoes off whenever she enters a building.

Then there’s gorgeous but aloof Tomohiro, star of the school’s kendo team. How did he really get the scar on his arm? Katie isn’t prepared for the answer. But when she sees the things he draws start moving, there’s no denying the truth: Tomo has a connection to the ancient gods of Japan, and being near Katie is causing his abilities to spiral out of control. If the wrong people notice, they’ll both be targets.

Katie never wanted to move to Japan—now she may not make it out of the country alive.

Oh, wow; was the first thing that I said once I’d finished Ink.
When I had the opportunity to join Amanda’s Blog Tour and get to read Ink, I was thrilled, because I had seen it so many times circling the blogs I read and how everyone was so excited to read it. This did not, by far, fall short of my expectations; I was hooked from chapter to chapter, enveloping myself more into the deep, and sometimes dangerous, beautiful culture of Japan and more into Katie’s world.
Katie Greene was a seemingly normal girl living in America until her Mother died and because her grandparent’s wouldn’t be up to look after her until she was eighteen and free to live on her own, her Aunt Diane takes her in. The only problem is…she lives in Shizuoka, Japan…the other side of the world.
Katie doesn’t know much Japanese to start with and feels completely lost in translation. She isn’t an outcast for this, though. In fact, she has two lovely friends at the start of Ink; Yuki and Tanaka. Yuki is actually the first to warn Katie from getting on Tomohiro’s bad side. But, independent and driven Katie goes against her warnings and makes herself seen on Tomohiro’s radar and from there…Ink truly begins…

“How do you win when you’re up against yourself?”

As always, this blog is a *spoiler free zone* when I post reviews, so without giving too much information away, my favourite things about Ink were; the way Amanda described the culture of Japan–I had never thought about visiting Japan before reading Ink at all, (aside from my fascination with Cherry Blossom Trees..) but after reading about how beautiful and tranquil it can be there, what the landscapes were like, etc, it just makes me want to look at brochures already, haha! Another thing that made Ink an absolute must-read was how realistic and spot-on Amanda was with her characters and information about Japan (she travelled throughout Japan and knows it pretty well). I found Katie to be someone who was headstrong, smart and intuitive, but overall, someone I would root for as the lead character and that is always something that takes the trophy for me; if a character is likeable and interesting, and Katie/Tomohiro were plenty. She was a normal girl rapped up in this world that revolved around how someone else’s secret becomes her own, and how alliances are made when two people must risk everything to protect the truth.
The thing I loved the most was…
THE ROMANCE
Okay, so it wasn’t your typical girl-meets-boy novel, but with this ‘Paper Gods’ twist, it had a unique, refreshing factor. There’s a boy who’s hiding behind this bad-boy image when in reality…there’s a whole other world beneath the pages. A reality Katie can’t even begin to understand. And you’ll be sucked into the story-world and Japanese rollercoaster as soon as you open the book…
An undeniable 5-star book that I will be re-reading until…well, until book two?; 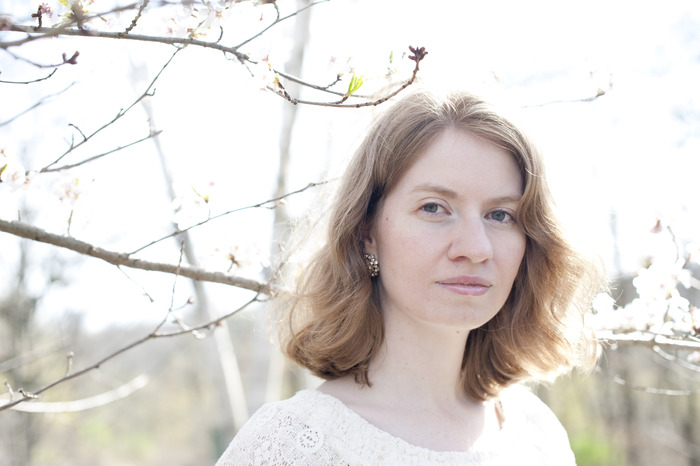 Amanda Sun was born in Deep River, a small town where she could escape into the surrounding forest to read. Ink is her first novel and The Paper Gods series is inspired by her time living in Osaka and travelling throughout Japan.
Visit her at www.AmandaSunBooks.com and on Twitter at @Amanda_Sun. Start the conversation by using #PaperGods or #Ink 😉
You can buy ‘Ink’ on Amazon!
Watch the trailer on YouTube, too 😉

My writing
space is my favourite place ever. I took over a bedroom on the second floor of
our house that looks out over a small park, and a row of cute, artsy houses. I
also have a flock of doves that land on the windowsill from time to time, so it
makes me feel rather Disney princess-ish.

On the other
side of the room is a pink desk with my sewing machine. I love having both my
writing and cosplay desks in the same room. It’s a good thing the walls in here
are a soft grey, because there is always a rainbow of fabrics sprawled around
for inspiration. I’m hoping to have some fun stuff to put on the walls
eventually—maybe fanart? (That’s totally a hint, guys.) And I’m thinking about
blowing up my covers and putting them on the wall too. I know I’m biased, but I
love them. ^_^
Is there a particular piece of information
or a small tidbit about Japan’s history or culture that most surprised or
fascinated you as you were researching?
I was
actually really lucky with my research, because the myths and history keep
lining up perfectly with the stories I want to portray in INK. For example,
Katie makes a visit to Itsukushima Shrine for a variety of plot and author
reasons—it’s an important shrine to the storyline, but I also wanted to feature
it in The Paper Gods because it made such an impact on me when I visited it. I
looked for a historical figure associated with the shrine, and found Taira no
Kiyomori, who features in SHADOW and is mentioned in INK. The most interesting
part? He was plagued by nightmares like Tomo’s, and all the signs lined up to
them having the ink in common. I keep finding these figures that I can twist
just a little to place my own Paper Gods mythology there without altering too
much, and that’s what I love. It keeps you guessing—how much is real? 😀
What country other than Japan would you
love to use as a setting for a future story? Why?
There are a
few I’m really interested in writing about. One is the Cook Islands. I think
Polynesian mythology is so fascinating, and it’s such a beautiful, almost
unknown place. So I would love to set something there. Another is Egypt, since
I majored in Archaeology. ^_^ And the UK, where I’ll be doing some research
this fall.
I love epic
Fantasy too, though, so I have a couple Fantasy worlds in my head that I’m
pretty convinced are real. ^_^ I love YA set in other countries because it’s
such a different experience to read. But of course, I want what I write to be
authentic, so it would involve a lot of research to get it just right!
Let’s say Ink is going to be made into a
movie and you’re put in charge of writing a tagline for the movie’s promotional
poster. What would the tagline read?
You know,
I’m going to cheat here and use the tagline my editor came up with for the
series, because it’s brilliant and I think it’s the best one there is. “Ink is
in their blood.” It gets everything in one go—a little sinister, a little
literal, and a lot ominous. ^_^
Of course, I
came up with a silly tagline a while ago which is fun too. I like to think of
INK as a mini-vacation, making Japan accessible for those who may want to visit
but be unable to at the moment. Which produced the tagline “INK—it’s cheaper
than airfare!”
Describe Ink in a seven word sentence.
Deadly
drawings, cute boys, and tasty food. 🙂

I adored ‘Ink’ and I am 100% sure you will find it as fascinating, suspenseful and mesmerising as I did! Be sure to check it out online or at your nearest bookstore! And a HUGE thank you to Mira Ink for letting me read this amazing novel!
happy reading,
xo Becca
Read my review on Goodreads and Amazon.