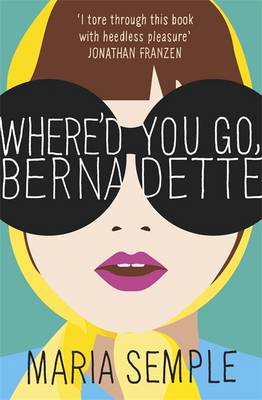 Kooky and whimsical, Bernadette’s story will be yours this summer…
I read this months ago, and completely loved it. I was given a copy for review from lovereading.co.uk as part of their Reading Panel, and just like Jonathan Franzen quoted on the cover; I also tore through this quick-smart. My review has been up over on lovereading.co.uk for quite some time so I thought I would share it with you all today!
Onwards…

A little bit about “Where’d You Go, Bernadette”…
Bernadette Fox is notorious. To Elgie Branch, a Microsoft wunderkind, she’s his hilarious, volatile, talented, troubled wife. To fellow mothers at the school gate, she’s a menace. To design experts, she’s a revolutionary architect.  And to 15-year-old Bee, she is a best friend and, quite simply, mum. Then Bernadette disappears. And Bee must take a trip to the end of the earth to find her.

Where’d You Go, Bernadette is a compulsively readable, irresistibly written, deeply touching novel about misplaced genius and a mother and daughter’s place in the world.
Add this book on Goodreads?

My Review:
Where’d You Go, Bernadette
is one of those books
that really stand out on your bookshelf. With its witty and sarcastic lines, though
entwined with soft, touching moments that’ll pull on the heartstrings, it never
fails to be a page-turner in my eyes.  Bernadette’s character was
lively—sometimes mistaken to be unattached and carefree, but underneath it all,
this book is summed up by how far Bernadette’s daughter, Bee, would go to
find her Mum, no matter what it takes.
Though incomparable, I was reminded of the
way Cecelia Ahern wrote “Where Rainbows End” in the emails and
letters point of this book—which makes a lot of a difference, giving you
a more detailed look into Bernadette’s life, and just how manic it seems.
Read in under a week, Where’d You Go, Bernadette captured my thoughts
for more than the time I was reading it—until after I had closed the last page,
and then some. It made me laugh, smile, and then laugh some more. Maria
Semple has definitely written one of the most entertaining books you’ll read
all year—and it surely was for me. From the cover, I grasped just how Bernadette
would appear; her scarf strewn over her head, big, dark sunglasses hiding half
her face—but most of all the belief that her kookiness is what made her
character so loveable.

I have loved this book from the very first
lines, and unquestionably the last few words.

You can read my review on lovereading.co.uk here.
If you ever pick up a copy of ‘Where’d You Go, Bernadette’, you’ll understand exactly all the reasons why so many people adore it.