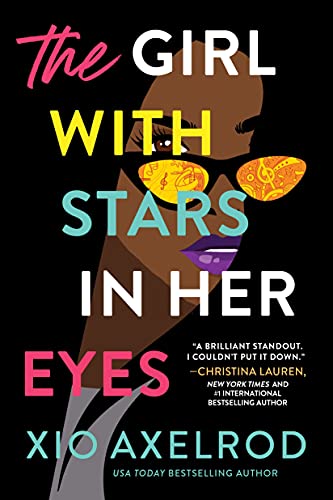 The Girl with Stars in Her Eyes by Xio Axelrod

Published: May 4th by Sourcebooks
Rating: ★★★★ (4)
Genre: Adult // Contemporary, Romance
Quick Thoughts: Rock and roll romance with fiery characters and all the emotions

About The Book: They say the road to stardom is paved with broken dreams.

Growing up, Antonia “Toni” Bennett’s guitar was her only companion…until she met Sebastian Quick. Seb was a little older, a lot wiser, and he became Toni’s way out, promising they’d escape their small town together. Then Seb turned eighteen and split without looking back.

Now, Toni B is all grown up and making a name for herself in Philadelphia’s indie rock scene. When a friend suggests she try out for the hottest new band in the country, she decides to take a chance. She’s in for a surprise when one of the decision-makers turns out to be none other than Seb. Toni can handle it. No problem. Or it wouldn’t be if Seb didn’t still hold a piece of her heart, not to mention the key to her future.

I’m so guilty of leaving this book in my TBR stack for far too long. I got so swept up in autumnal reads that I missed this beauty sitting patiently in my stack of to-be-read books. I was in the mood for something non-YA for a change this past weekend and when I saw this, I knew it was the answer.

Right away, Xio Axelrod’s writing sucks me straight into my emotions. The book is very heavy on emotion, in the best way, right from the start. Our main character, Toni Bennett, has had rocky times. Growing up, her guitar was her best friend. That’s until she met Sebastian. They just clicked. Promising that they’d stay together and never drift, they make pacts that don’t pan out. Seb turns eighteen and leaves, breaking Toni’s heart. Years later, Toni is older and much wiser. She’s cementing her name in the rock and roll game, showing the city her incredible talent as a musician at a club in Philadelphia. But when she decides to take up her friends offer and audition for a hot new band, she can’t believe her eyes when one of the make-it-happen guys is Sebastian himself.

Running into Seb was not part of Toni’s plans. It immediately takes her back to that heartbroken state of mind she was in after he left, reopening a closed chapter of her life she thought was long left behind. But with the amazing offer to become the guitarist in a band that’s heading for stardom, mixed with Seb being around, Toni doesn’t know what to do: follow her heart and risk getting hurt or give up the best experience of her life.

Overall, The Girl With Stars In Her Eyes was a whirlwind read of rockstar dreams, music, romance and SO. MUCH. EMOTION. I know I keep saying that, but something about Xio’s writing just clutched at my heartstrings. From Toni’s struggle with distant parents, to her connection with Seb, old wounds and wild dreams, I was kept entertained and focused the entire time I held this book in my hands. I did find some parts stagnant and wished the romance had a slightly bigger part, but altogether, it was a rock and roll romance with fiery characters that I completely adored. Four incredible stars!

Have you read The Girl With Stars In Her Eyes?