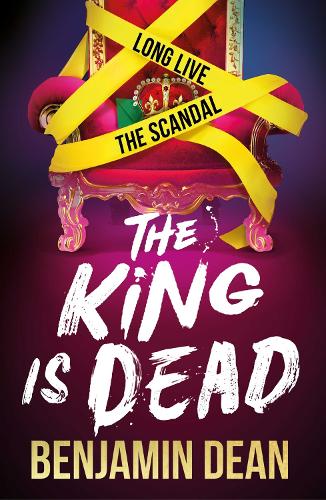 The King Is Dead by Benjamin Dean

Simon vs. the Homo Sapiens Agenda meets The Inheritance Games in this Black LGBTQ+ royal romp full of heart-swooning romance, scandalous secrets and one hell of a mystery.

James has been a prince all of his life, and since he was born, he’s been thrust into the spotlight as the first Black heir to the throne. But when his father unexpectedly dies, James is crowned king at seventeen. Now, the secrets he could keep as a prince with no real responsibility – namely, his sexuality and hidden relationship – are rocked as his life irrevocably changes.

When his boyfriend suddenly goes missing, the royal secrets and scandals that only he knows start to leak online. And when it becomes clear that whoever is behind the messages isn’t going to stop anytime soon, James begins to question everyone around him .

I picked this up whilst battling Covid-19, believe it or not, and actually read it outside on the deck in between coughs and bouts of temperature flares—but something about it distracted me from my pain, and that’s all I needed to know I’d end up loving this story.

James, our MC, has been a Prince for his entire life. Growing up surrounded by royalty, press and scandal is one thing, but knowing that he will be King one day—the first Black heir to the throne—terrifies him. So when his father dies abruptly, he’s suddenly given a dose of massive responsibility as the new King. But being King comes with a whole world of new rules. The things he kept a secret as a Prince can no longer live beneath the shadow he’s cloaked it in, like his relationship that James has kept hush-hush, out of fear of what would happen if the world were to know he’s got a boyfriend.

Then his boyfriend goes missing, and chaos erupts. Overnight, it’s as if his entire secret-catalogue is on display, scandals that he kept close to his chest sprawled across the front pages, leaked online for the world to see. The mystery of how—and why—this is happening sends James into a spiral. He begins to question everything and everyone, getting lost in scandals, mystery and a whole lot of politics.

Overall, The King Is Dead was an alluring, sharp and charming read with royalty, secrets and a twisty mystery that kept me entertained. I loved that Benjamin wove realistic aspects of racism and homophobia into the story, showing just how true of an issue this is, not only with royals, but in tabloids as a whole. Although I found some of the beginning slow to start, once it kicked off, I was fully enthralled by everything The King Is Dead represented. I highly recommend this perfect-for-summer-reading book. Four shiny stars!

Benjamin Dean is a London-based celebrity reporter. His biggest achievement to date is breaking the news that Rihanna can’t wink (she blinks, in case you were wondering). Benjamin can be found on Twitter as @notagainben tweeting about Rihanna and LGBTQ+ culture to his 10,000+ followers. Me, My Dad and the End of the Rainbow is his debut book and he's currently working on his second, publishing in 2022.

Have you read The King Is Dead?