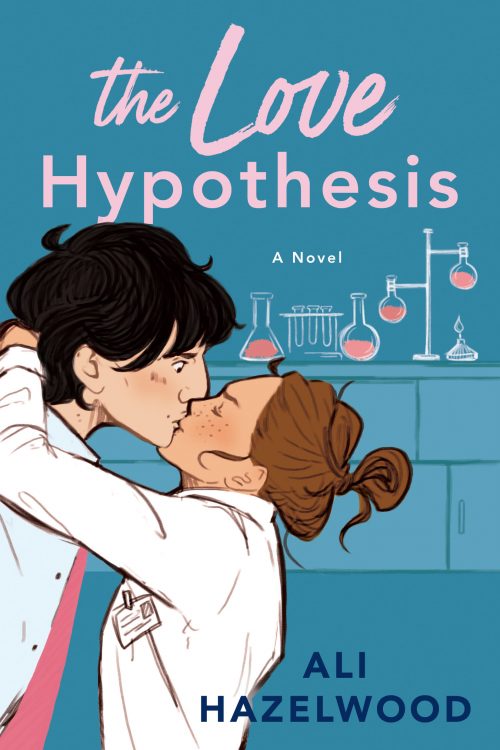 The Love Hypothesis by Ali Hazelwood

Add to Goodreads
I purchased this book with my own money, non ad/gifted. There was no obligation to post/give this book a certain rating. This gifting in no way alters my review and I remain impartial.

About The Book: As a third-year Ph.D. candidate, Olive Smith doesn’t believe in lasting romantic relationships–but her best friend does, and that’s what got her into this situation. Convincing Anh that Olive is dating and well on her way to a happily ever after was always going to take more than hand-wavy Jedi mind tricks: Scientists require proof. So, like any self-respecting biologist, Olive panics and kisses the first man she sees.

That man is none other than Adam Carlsen, a young hotshot professor–and well-known ass. Which is why Olive is positively floored when Stanford’s reigning lab tyrant agrees to keep her charade a secret and be her fake boyfriend. But when a big science conference goes haywire, putting Olive’s career on the Bunsen burner, Adam surprises her again with his unyielding support and even more unyielding… six-pack abs.

Suddenly their little experiment feels dangerously close to combustion. And Olive discovers that the only thing more complicated than a hypothesis on love is putting her own heart under the microscope.

It’s not called a TikTok sensation for nothing. The Love Hypothesis is all over social media (namely Tiktok, where the craze sort of began) and even though I’m usually a YA girl, I couldn’t deny that it looked extremely intriguing, since I’m a sucker for the tropes that the book has. So, obviously I bought it, even if just to “see” what it was all about. Needless to say, I very quickly fell in love with it.

Our main character Olive is a third-year Ph.D. candidate, pumpkin latte obsessed and one of the most fun characters I’ve read about (and got to know even greater as the book went on) in a very long time. At the beginning, she’s desperately trying to convince her best friend Anh that she’s dating someone so that Anh will finally take the plunge and date a guy that Olive isn’t interested in (although Anh thought so, which is why she wouldn’t go for it.) The first guy that Olive finds on campus is Adam Carlsen. Tall, brooding and a widely-known pain in the butt, he’s a young professor that’s very well known for being anything but kind. She kisses him when she knows Anh will see, sealing her fate. But she’s shocked to discover that Adam has his own reasons for wanting a fake romance, and before she knows it, they’re embroiled in a romantic façade over coffee dates, embarrassing scenarios and line-crossing moments.

Olive can’t deny that she’s falling for Adam. Once thought to only be an idiot in general, she starts to see something brighter beneath the surface. The more that they find themselves turning their fake romance into a real connection, the harder it is to see the finish line coming up where they’ll both no longer need to hide behind the false narrative they began. But after a science conference throws Olive into a traumatic frenzy – and she crosses the line firmly with Adam, too – things go from zero to one hundred in the blink of an eye, throwing both of their fates up in the air in the follow-up.

Overall, The Love Hypothesis threw me. I’m usually not a fan of third-person POV, but somehow I managed to gel with Olive’s character immediately. I completely adored the subtle, yet powerful romance between her and Adam, and his character was equally as *chef’s kiss*. I loved that there was so much girls-supporting-girls, representation and no cliff-hangers, leaving everything in a place that made my heart happy.  It was truly what I can only describe as a grumpy-meets-sunshine romance with flawless banter and wholly loveable characters, with a little extra spice thrown in. Five massive stars!

My favorite thing in the world is to explore traditional romance tropes—and to picture how they’ll play out in academic settings. Rival scientists falling in love despite their better judgement? There’s only one cot in the lab? Fake dating during faculty meeting? Sign me up! I’m originally from Italy, lived in Japan and Germany, and eventually moved to the US to pursue a Ph.D. in Neuroscience. I recently became a professor, which absolutely terrifies me. Oh, the sheer dread of being entrusted with the care of young minds! When I’m not at work you can find me binge-watching shows with my feline overlords (and my slightly less feline husband), running, or eating candy. Oh, and I’m a New York Times Bestselling Author.

Have you read The Love Hypothesis?

If you haven’t, don’t forget to add this perfect book to your TBR!