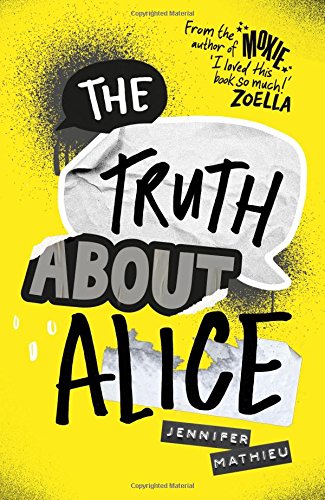 Title: The Truth About Alice

From the author of Zoella Book Club book MOXIE comes a startling book about stereotypes, slut shaming and the battle for popularity.
Everyone knows Alice slept with two guys at one party.But did you know Alice was sexting Brandon when he crashed his car?It’s true. Ask ANYBODY.
Rumour has it that Alice Franklin is a slut. It’s written all over the ‘slut stall’ in the girls’ bathroom at Healy High for everyone to see. And after star quarterback Brandon Fitzsimmons dies in a car accident, the rumours start to spiral out of control.
In this remarkable novel, four Healy High students – the party girl, the car accident survivor, the ex best friend and the boy next door – tell all they know.
But exactly what is the truth about Alice? In the end there’s only one person to ask: Alice herself.
‘Should be required reading for anyone in high school’ Bustle

I am guilty of not having read MOXIE, but still a huge fan. It stands for everything that I do and why I haven’t got around to it…I have no excuse. I’m bookishly guilty! I own a copy that I bought on holiday in Exeter and it’s still sitting in my TBR. So when Hodder reached out with The Truth About Alice, I threw myself at the chance. After all, it was published before Moxie, so maybe I could read them back to back? I went in with the highest of hopes and wasn’t disappointed.

The story starts with a bang. Quite literally the most startling opener I’ve read in a while. We get pulled into the mystery from the get-go and everything revolves around, you guessed it, Alice Franklin. There’s rumors, and then there’s downright vicious-meets-huge rumors, which is what Alice has under her belt. It’s written in bathroom stalls in the Girls’ bathroom, the talk of the School and spirals a web of mystery when Brandon Fitzsimmons, star quarterback, dies in a car accident. People say it’s Alice’s fault. But is it really? Because no one really knows the truth about Alice (quite like the title) other than Alice, herself. So we start with four tell-all’s from four different students at Healy High, who spill their version of the truth and the consequences that lead us down a treacherous path.

When we finally delve into the heads of the different characters, the truth crawls its way out. I was really taken aback by some of the things Alice’s “so called” friends said behind her back, the rumors that they spread without knowing the truth, and the way the town paraded the fallen football star as a hero, despite his poor treatment of women. Whenever we get a story like this, there’s always so much going on beneath the surface that it’s a sense of relief to delve into the truth and not have this barrier of reader-meets-character. Knowing the outcome of The Truth About Alice (no spoilers, it’s *so good* and you need to read it yourself) was like the perfect sheet of ice being shattered by a sledgehammer, truth – or freedom – at last.

Overall, The Truth About Alice was incredible. I can see why people love Jennifer’s novels and I’ll definitely be picking up Moxie as soon as I can. There’s so much depth and character to this novel, and it’s got something for YA and older readers to gain something from. The character development was on point, and in particular Alice. Truly such a remarkable read that I don’t want to say too much about for fear of spoiling you all. Do yourselves a favour and go read this ASAP – you’ll thank me later.

Have you had the chance to read The Truth About Alice?