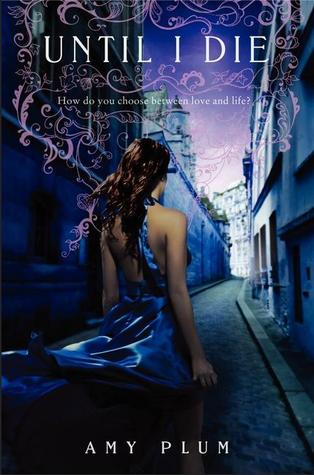 I purchased this myself and I’m in no
way bias from one book to the next.
These opinions are totally my own.

Kate and Vincent have overcome the odds and at last they are together in Paris, the city of lights and love.

As
their romance deepens there’s one question they can’t ignore: How are
they supposed to be together if Vincent can’t resist sacrificing himself
to save others? Although Vincent promises that he’ll do whatever it
takes to lead a normal life with Kate, will that mean letting innocent
people die? When a new and surprising enemy reveals itself, Kate
realizes that even more may be at stake—and that Vincent’s immortality
is in jeopardy.

In Die for Me, Amy Plum created a captivating
paranormal mythology with immortal revenants and a lush Paris setting.
Until I Die is poised to thrill readers with more heart-pounding
suspense, spellbinding romance, and a cliff-hanger ending that will
leave them desperate for the third and final novel in the series.

After reading–and adoring ‘Die For Me’, I was excited to rapidly move onto the next installment in the series. I mean, what’s better than a love story set in the city of light and love? Kate and Vincent’s story wasn’t a simple one, but they had found each other, and were pretty much made for each other. I went straight from the end pages of Die For Me to the first page of Until I Die, so I didn’t have much time to adjust and put myself in a new frame of mind, which felt better, knowing that I could remain in the storyworld undisturbed.

I connected with Kate so much better in Until I Die. She was, of course, the idealistic lead character every reader wants to read about, even in Die For Me, but in book 2, there was just something new and different about her that just came across so likeable and relateable, and she got HILARIOUS, too! She was always kidding about with Vincent, and that’s something I think where Amy Plum really made that *incredible* story; she made it feel real. Nothing is always so serious all the time to where it’s just thrills and mystery, there was actually a story within a story, and I found that addictive and sweet.
Until I Die pulled at my heartstrings so much. With Charlotte and Charles leaving, then the whole Vincent could be the Champion who saves us all, it just seemed like this puzzle that I was dying to crack before the end! Is it possible Jules was more flirty in book 2? Maybe! Him and Kate did share a few more scenes where he was a little more than friendly, and I actually could see that maybe he liked her a lot more than first thought. Like this one quote;
“As Jules kissed my cheeks he whispered, “She has nothing on you, of course, Kates. It’s just that you’re so very…taken.”

Sweet or what?! But sweeter than this…?
“Now that you are here–now that we’re together– I can’t imagine going
back to the life I had before. I don’t know what I’d do if I lost you
now. I love you too much.”
I wouldn’t call it a ‘love triangle’ because Jules has never actually been anything other than flirty (not competitive or anything) and he is Vincent’s best friend, so no one suspects anything, so as far as Kate is concerned, it’s all innocent.
Georgia; Kate’s older and to quote Kate; painfully beautiful, sister, gets a starring role in Until I Die. She was a lovely character to read about in book one, but in Until I Die, she really gets to shine and get some classic one liners. She’s always oozing confidence, and isn’t afraid to stand up for what she believes in. Especially now she knows about the Revenants, that is. But, she’s not allowed in La Maison because of the whole Lucien incident…but one person who didn’t like Georgia, was Violette. But even though Violette seemed like a nice, typically friendly girl to be around…she had other ideas.

“Before I saw you, I hadn’t cared for anyone for . . . well, for the
good part of a century, and it felt like my heart had been permanently
disconnected. I wasn’t even looking anymore. And without expecting
anything . . . without any hope at all, suddenly you were here.”

Book 2 was very romantically based, and that was the perfect in-between for me, because it had that certain storyline where the pace was moving as the characters raced for a conclusion, but their lives still evolved and changed. Vincent and Kate had their moments, where he would be keeping secrets (hence the HUGE secret he’s keeping!) and telling her that everything is under control and that she should just trust him so that they can be together…until she dies, that is. All he needs to do is repress the need to save someone’s life and die for another. But it’s not always that simple…is it?
And the ending to Until I Die startled me and left me in awe. I literally felt like I was hanging from these words that were so surprising and shocking, that it fueled my need to read more.
Amy Plum; you are already on my favourite authors list, now. There is just nothing I could ever flaw about your plots, characters and writing style. Everything, down to the character personalities, history of Paris and the Revenants…it’s flawless.
Consider me a Revenant fan forever, haha.
5 stars all around!

I can’t wait to read Die For Her; 2.5. It’s going to be such a different aspect to the whole Vincent/Kate side of things to have Jules as a lead character, in a really good way. We can finally find out his true intentions and maybe it will answer some unanswered questions from the first two novels? I’m in for a whole host of unraveling!
Until I Die was another 2-day read for me…I’ve been reading like a mad girl these past few days. Getting lost in storyworld’s is one of my favourite places to be, and if it happens to be in Paris, then let it be, ahaha.