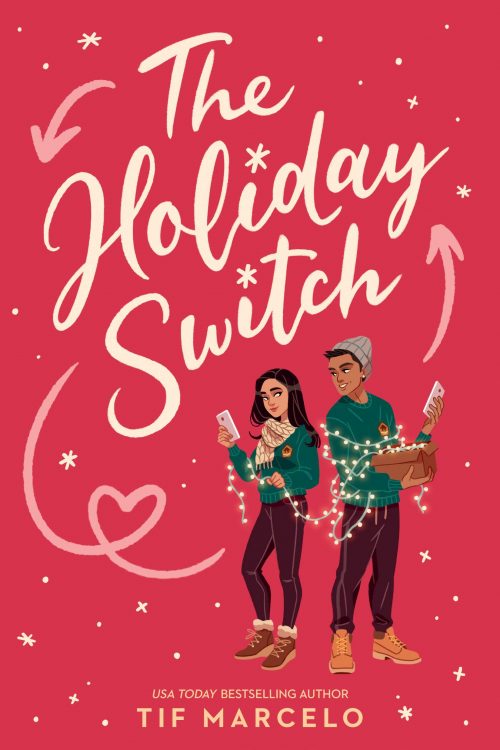 The Holiday Switch by Tif Marcelo

About The Book:   A paperback original romance about a bookish Filipino-American girl who crosses paths with the innkeeper’s aggravating nephew–but when they accidentally switch phones, their newly discovered secrets draw them together.

Lila Castro is ready to take on her last winter break of high school. The snow is plentiful, the mood is full of holiday cheer, and she’s earning extra cash working at the cozy local inn. But her perfect holiday plans crash to a halt when her boss’s frustratingly cute nephew, Teddy Veracruz, becomes her coworker. When they accidentally switch phones one afternoon, they both realize they’ve been hiding things from each other. Will their secrets–and a dash of holiday spirit–bring them closer to love?

Underlined is a line of totally addictive romance, thriller, and horror paperback original titles coming to you fast and furious each month. Enjoy everything you want to read the way you want to read it.

The Holiday Switch has been on my radar since mid-year and I’ve been slowly, but surely, counting the days until it was in my hands. I have really loved shorter YA reads lately, so I slotted this beauty into my Christmas TBR stack at the perfect time to enjoy it mid-December!

Lila, our main character – a Filipino-American girl about to finish High School – works at a local inn part-time. It’s not just any regular old inn. In Holly, her hometown in New York, the inn holds a special place of memory for a novel-turned-book that took place, Holiday By The Lake. Lila is a huge fan of it, so working there is a major plus for her. And she gets to create her own bookish corner too, something she’s immensely passionate about as a book lover and secret blogger.

But the holidays don’t go without a hitch. Lila plans to work extra hours to pay for her upcoming tuition to University, but then her boss’s nephew Teddy arrives, absorbing her highly coveted hours as her new co-worker, tumbling straight into her life, striking a nerve as he does. Only one afternoon, they accidentally switch phones in a mishap, Lila not even realising until it’s far too late. Suddenly she’s face-to-face with Teddy, both of their secrets on display to each other. Her secret blog – Tinsel and Tropes – is now a secret held in his hands, and she’s slowly learning that he’s sitting on secrets just as large. What should drive them further apart only brings them closer together though, and slowly Lila and Teddy melt from enemies to friends to something a little more, blurring the lines with each new slice of their lives that they divulge to one another. And with a huge event upcoming at the inn – plus Christmas and New Year’s, it’s a matter of time before their secrets, and their newfound fondness of one another, is up in the air.

Overall, I absolutely adored The Holiday Switch. What I thought would be a light and fluffy holiday romance actually made me feel so comforted and happy in a way. I really love Tif’s style of writing, her way of describing the holidays being so immersive and atmospheric. I don’t read a lot of nemesis-then-friends-then-more tropes as it’s quite overdone when not done right (like this book was done perfectly), but also Lila and Teddy make it so easy to love the trope even more. Also the family/friendship parts were *chef’s kiss* stunningly written! This was such a delightful pun-filled festive romance with enemies-to-lovers and all the feels for the season. Beautiful read!

Tif Marcelo is a veteran US Army nurse and holds a BS in Nursing and a Master’s in public administration. She believes and writes about the strength of families, the endurance of friendship, heartfelt romances, and is inspired daily by her own military hero husband and four children. She hosts The Stories to Love Podcast, and is the USA Today bestselling author of In a Book Club Far Away, Once Upon a Sunset, The Key to Happily Ever After, which was a Target Diverse Book Club pick, The Holiday Switch, and the Heart Resort and Journey to the Heart series. She and her books have been featured in The Today Show, Shondaland, Real Simple Magazine, The Asian Journal and more! Her website, which includes a link to her newsletter, is www.TifMarcelo.com

Have you read The Holiday Switch?

If you haven’t, don’t forget to add this holiday-perfect book to your TBR!